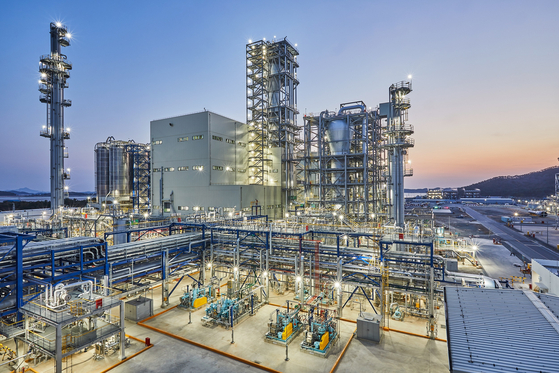 
Hanwha Total Petrochemical has completed the expansion of its ethylene and polypropylene production facilities in Daesan, South Chungcheong, at the cost of 530 billion won ($470 million), the company announced on Wednesday.

Of the 530 billion won, 380 billion won went toward building a new plant designed to produce 400,000 tons of polypropylene annually.

That will add to existing capacity of 720,000 tons, making the total annual capacity from the Daesan production site 1.12 million tons, the largest among polypropylene producers in Korea.

The remaining 150 billion won was used to expand its naphtha cracking center to boost its production capacity of ethylene by 150,000 tons. With the expanded facility, Hanwha Total is now able to supply 1.53 million tons of ethylene every year.

The latest additions bring to an end a long-running project that began in 2017.

The initiative included multiple rounds of expansion and upgrading of the facilities and cost the company 1.47 trillion won in total.

Ethylene and polypropylene are basic materials used to make petrochemical products like plastic.

“The completion of the project helped secure one of the largest polypropylene production capacities in Korea,” a source at Hanwha Total said.

“We will keep trying to boost the efficiency of production at the new facilities and find fresh sources of revenues for the future,” the source said.