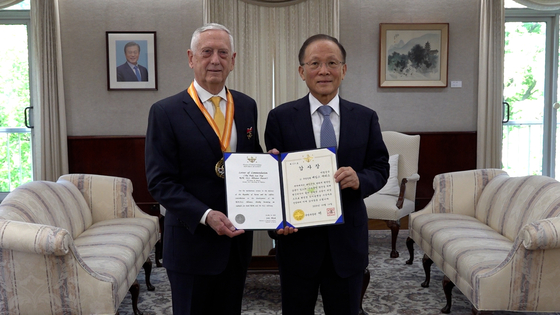 Former U.S. Secretary of Defense James Mattis, left, is presented the 8th Paik Sun-yup ROK-U.S. Alliance Award by Korean Ambassador to the United States Lee Soo-hyuk in a ceremony at the U.S. Embassy in Washington on Tuesday for his contributions towards the bilateral alliance and security of the Korean Peninsula. [JTBC]


Former U.S. Secretary of Defense James Mattis received the 8th Paik Sun-yup ROK-U.S. Alliance Award in a ceremony Tuesday in Washington for his contributions to bilateral relations and the security of the Korean Peninsula.

Korean Ambassador to the United States Lee Soo-hyuk presented the award and medal to Mattis, a retired Marine Corps four-star general who served as Pentagon chief from January 2017 to January 2019, on behalf of Defense Minister Suh Wook at the U.S. Embassy in Washington.

The JoongAng Ilbo is a sponsor of the award, named after the famed Korean general critical in establishing the early military ties between the allies.

The Korean Defense Ministry said that Mattis was selected for the award in recognition of his stable leadership during a period of crisis on the peninsula in 2017, helping lay the foundations for the pursuit of diplomatic talks. He also helped create a blueprint for how the alliance would operate following the transition of wartime operation control (Opcon) from the United States to Korea.

Mattis said he "humbly" accepted the award, which he said was especially meaningful because it honors Paik Sun-yup, noting the Korea-U.S. alliance was established with the leadership of the late four-star general.

He further noted that the 70-year-old alliance, established during wartime for the freedom of Korea, will be the "cornerstone for the peace" of future generations of Koreans and Americans.

Defense Minister Suh and Hong Jeong-do, the president and CEO of the JoongAng Ilbo and JTBC, delivered congratulatory remarks through video messages.

Mattis donated the $30,000 he was awarded to be used to help erect a wall to commemorate U.S. veterans of the 1950-53 Korean War in Washington.

South Korea established the General Paik Sun-yup award in 2013 to award U.S. personnel considered to have contributed to the nation's security and the bilateral alliance.

Mattis served as the first defense secretary under the Donald Trump administration and played a key role in assuaging fears in South Korea and de-escalating tensions amid the "fire and fury" rhetoric from the former U.S. president after North Korea's nuclear test and intercontinental ballistic missile launches in 2017.

An award ceremony for Mattis was initially expected to be held during a Korea-U.S. Security Consultative Meeting in Washington last October, but the Covid-19 pandemic prompted the Defense Ministry to postpone the event until Tuesday.

Paik is famous for telling Gen. Douglas MacArthur, "We go together" — a motto Hong in his congratulatory remarks said best represents the spirit of the Republic of Korea-U.S. alliance, which is also embodied by Mattis.

Paik, the first four-star general of the Republic of Korea Army, was a Korean War hero who was one of the South Korean representatives who partook in ceasefire talks at the end of the war. He later became a chairman of the South Korean Joint Chiefs of Staff and died in July 2020 at the age of 99.

The late Gen. Walton Walker, who commanded the U.S. Eighth Army in defending the Busan Perimeter during the war, received the inaugural award first, marking the 60th anniversary of the mutual Defense Treaty that established the bilateral alliance. Since then, the Paik Sun-yup award has been presented every year to individuals that have advanced the Korea-U.S. alliance in significant ways.