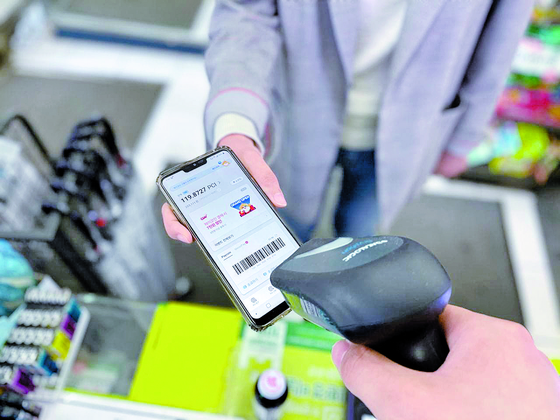 A customer makes a payment via paycoin at a convenience store in Seoul. [DANAL FINTECH]

Cryptocurrencies are finding their way into people’s daily lives. At least in theory, they can be used to pay for coffee, movie tickets — or make donations to charities.

Peertec, a fintech company that runs cryptocurrency exchange GDAC, made a 100 million won ($88,900) donation to the Community Chest of Korea late last month — in bitcoin.

It was the country’s first donation made in a cryptocurrency.

The donation will be used to improve the quality of education in some 10 childcare facilities, according to the Community Chest of Korea.

“We have registered with GDAC as a corporate member and opened an account to accept the donation,” said a spokesperson for the Community Chest of Korea.

Customers using the Paycoin app can pay with the coin, which is converted automatically to the won price. People who own bitcoin can convert them into paycoin via the app and pay for things.

The number of users of the app number 1.5 million so far in Korea.

Global companies are also getting into the cryptocurrency payment game.

PayPal, the U.S.-based online payment service, launched a crypto checkout service in March. It allows customers who own bitcoin, bitcoin cash, ethereum and litecoin in PayPal digital wallets to convert their holdings into U.S. dollars to make purchases.

Auction house Sotheby's announced Tuesday that it will accept bitcoin and ethereum in payment for its upcoming sale of “Love is in the Air,” a work by Banksy, the British artist.

The auction house is teaming up with cryptocurrency exchange Coinbase to process any payment.

California-based e-commerce company eBay said Monday that it is “open to the possibility of accepting cryptocurrency as a form of payment” in the future.

Seoul's city government is using cryptocurrency as a means of dealing with tax delinquencies.

It was the first local government to go after crypto assets.

According to the Seoul Metropolitan Government, some of those taxpayers are asking it to refrain from selling their cryptocurrencies, saying they will pay the taxes immediately in another form.

About 118 of them paid back a total of 1.2 billion won in overdue taxes as a result of the seizures, according to the Seoul Metropolitan Government.

“We believe they expect the value of their cryptocurrencies to increase and determined that they would gain more by paying their delinquent taxes and having the seized assets released,” the Seoul Metropolitan Government said in a press release.

The city governments of Gwangju and Geoje are scrambling to uncover cryptocurrency assets of their delinquent taxpayers.

Cryptocurrencies themselves will be taxable starting next year.

The tax rate is set at 20 percent of capital gains from cryptocurrency investments. The first 2.5 million won in profits will be tax-exempt.

Anyone who wishes to bequeath or give away cryptocurrencies to their children will also have to pay inheritance tax and gift tax of between 10 percent and 50 percent depending on the amount. The value of assets will be calculated on the basis of the daily average for the coin one month before and one month after the date of the inheritance or gift.

The tax on cryptocurrency will be applied starting next January.

Mr. Choi, a 52-year-old office worker, abandoned a plan recently to give his son 1.5 bitcoins he bought three years ago.

“Now the value of my holdings exceeds 100 million won, and the gift tax is likely to jump,” said Choi. “If I knew about the taxation beforehand, I would’ve given it away to my son a long time ago.”

“It’s just so frustrating that the government suddenly revealed its plan to impose a heavy tax [on cryptocurrencies].”

There are different views about how the government is going about regulating cryptocurrencies.

However, Kim Sang-bong, an economics professor at Hansung University, said it’s not the right time for cryptocurrencies to be integrated into Korea’s regulatory framework.

“Currently the prices of cryptocurrencies change so easily depending on some comments made by public figures or famous people,” said Kim. “Cryptocurrencies are more like speculative assets, so a very cautious approach is needed.”