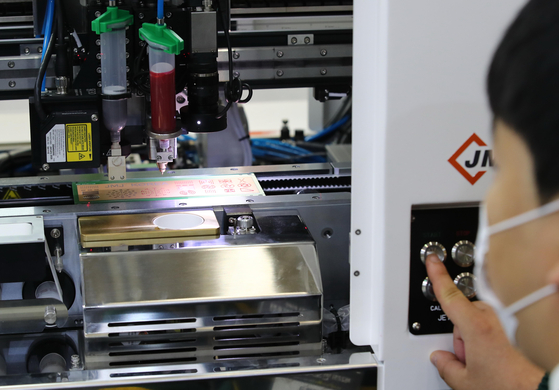 A staff from a chip equipment company demonstrates a laser printer at the annual Semiconductor Exhibition held in October at COEX, southern Seoul. [YONHAP]


Korea gets a failing grade for certain types of chips as it falls further behind global leaders in terms of development and manufacturing.

While it remains the king of DRAMs, it is an also-ran in a number of key semiconductors.

In a recent survey conducted by Federation of Korean Industries (FKI), a business lobbying group, and the Korean Society of Semiconductor & Display Technology (KSDT), Korea received an average score of 59 of 100 in AI chip design and 59 for automotive chip design.

One hundred participants answered the questionnaire, 60 academics and 40 executives at chip-related companies.

In production equipment for semiconductors, Korea received a 60, in chip parts 63 and in chip materials a 65.

Those surveyed were pessimistic about the overall environment, with 85 percent saying China ramping up support for local chipmakers and Taiwan-based TSMC’s massive investment plan are big threats.

In terms of the U.S. government’s drive to boost chip production, 55 percent called it a risk and 39 percent viewed it optimistically.

“Korea’s semiconductor companies were already facing the difficult task of widening the technical gap in memory chips and catching up to global leaders in system chips,” said Yoo Hwan-ik, an FKI director in corporate policy. “The geopolitical circumstance surrounding chip leadership just adds to their list.”

Korea did get 80 points for device and phone system chips, as well as a 92 for memory chip architecture design and 95 for production technology.

The FKI expressed concern about the low scores, as the areas where Korea is weak are those that will be important in the development and manufacturing of future technologies, such as self-driving vehicles.

Korean chip production equipment sales grew 61 percent to $16 billion in 2020, according to data from Semiconductor Equipment and Materials International, making Korea the No. 3 supplier of such equipment, but chip equipment imports last year were still three times higher than exports: $13.8 billion versus $4.2 billion.

Of the respondents, 14 percent were concerned about the lack of a quality workforce. Their opinion, according to FKI’s study, was that Korea lacked in the number of students and professors to train employees and that the increase of labor supply was in no way meeting domestic demand.

At the moment, the Korean government generally offers tax credits of between 1 and 10 percent on production facility expansion. For research and development, the credit ranges from 2 to 25 percent. The bigger a company, the smaller the credit.

The FKI and KSDT urged the government to boost the tax credit to 50 percent.

Park Jea-geun, an electronic engineering professor at Hanyang University and head of the Korean Society of Semiconductor & Display Technology, said Korea needs to develop a policy drive as strong as that in the United States, where the government is pushing for an increase in semiconductor manufacturing.

“We need investment incentives on par with the U.S. government,” said Park. “Fast-track approvals for facility expansion and infrastructure support for electricity, water and workforce training programs all need to be part of the package of a Korean ‘chip promotion law.’”