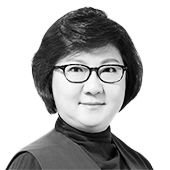 Choi Ji-young
The author is the director of the economic and industry news of the JoongAng Ilbo.

When I first heard about The Hyundai Seoul opening in Yeouido three months ago, I just thought that one more spacious retail place had been added to the market. During the pandemic, I heard how the new department store was so crowded that cars were restricted by even-odd numbers on the license plates and waiting lists for restaurants went over 200. People were curious to visit the “biggest department store in Seoul” or “the newest place.” I also thought that the pent-up spending psychology was in full swing as customers got depressed by Covid-19.

After three months, my thoughts have changed. Every industry insiders, not to mention rival retailers, say that they visit the department store to learn about how to survive as a brick-and-mortar store and get ideas. A food company employee I recently met found it interesting that Hyundai Department Store was known to have a conservative business culture but filled the store with innovative content never seen before.

Renowned marketing experts are not surprised by the 12-meter-tall (39-feet) artificial waterfall or the 3,300-square-meters (35,521-square feet) indoor garden. Dedicating half of the total spaces for people to relax can be done by simply giving up the business space and requesting global design companies.

The clear difference is the “first stores” located on the first floor of a department store. Without the top three global luxury brands, Hermes, Louis Vuitton and Chanel, the department store is filled with things for the customers in their 20s and 30s.

Its second basement is the playground for younger people. I’ve never seen shops such as luxury watch reseller Yongjeong Collection and the BGZT Lab (opened by used goods trading app Bungaejangter) on the second basement of a department store. A consumer goods company employee said that it was unexpected how Hyundai Department Group, which is considered relatively behind in online transformation, scored big with offline success today.

Hyundai Department Store explained that it worked out because it was in trouble. It prepared thoroughly for the first offline department store opening in seven years. It had to introduce new brands to make a store that didn’t exist before. As a part of the strategy, CEO Kim Hyung-jong ordered the second basement filled with the brands that he did not know of. Instead of the executives doubting why a department store should have a used goods reseller, they accommodated the ideas of the youngest employees in each team.

In fact, amid the surge of online stores, many Korean and foreign companies focus on offline stores. While it is costly to maintain both online and offline stores due to mounting lease, labor and storage expenses, they want to convey the value of the products to the customers that clicking and scrolling cannot deliver.

Environmentally friendly shoe start-up Allbirds was founded in Silicon Valley in 2016. It continues to open new offline stores while focusing on online sales. The Allbirds store that opened in Garosu-gil, Seoul last month is the biggest in Asia.

The interior reflects the features of the shoes and emphasizes environmental friendliness. It is unique that shoeboxes are stored in bookcases for the customers to personally try different models and sizes. The store brought to life how co-founder Zoey Zwillinger wants the offline stores to make a place for customers to interact with products instead of simply selling goods.

Global investment firm Bernstine’s analyst Mark Shmulik said that “benefactions of shoppers’ muscle memories” will not vanish overnight. (“The return of one-to-one commerce,” wrote the Economist, March 2021) Offline stores that excel in their jobs would last longer than expected.

It applies to the small business owners who will have to capture some returning customers when pandemic is finally brought under control. Unfortunately, customers will not return to the same, old stores.

Brick-and-mortar retail is not dead yet. Only the ones that fail to suit the changing taste of the customers will vanish.