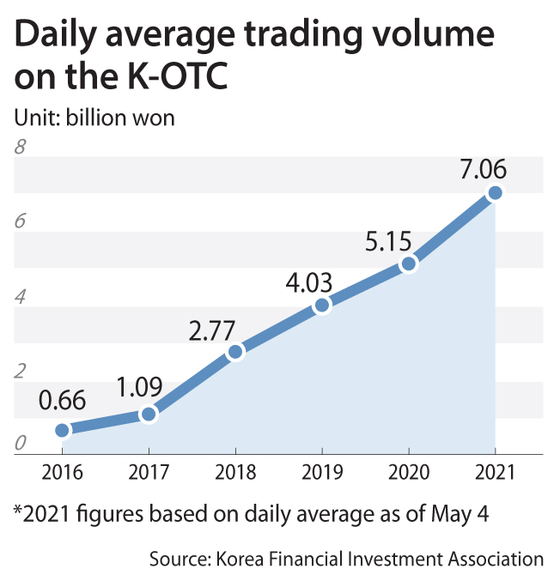 The K-OTC, a little publicized corner of Korea’s capital markets, is getting more attention these days from investors, with volume up about 30 percent from last year.

Like many minor boards elsewhere globally, it gives investors a chance to buy into companies that have not yet gone public, and is especially interesting for those seeking a way to get some shares in a company before they go public on the Korea Exchange.

The K-OTC is run by the Korea Financial Investment Association (Kofia), with the securities traded via a dealer network. The brokers themselves can also trade stocks over the counter outside of K-OTC on their own platforms, such as on the Stockplus Unlisted app operated by Dunamu, which also operates Upbit, Korea’s largest crypto exchange.

In Korea, Kospi stocks are traded on the Korea Exchange, which also hosts the Kosdaq and Konex markets. In addition to the K-OTC market, a separate K-OTCBB bulletin board system allows for the exchange of shares that are neither Korea Exchange listed nor on the K-OTC.

Recent IPOs in Korea have been underpriced, and the number of shares offered limited. The scarcity and the high demand for the cheap shares has led to retail stampedes during the offerings, with most buyers only getting a fraction of their orders.

The K-OTC market gives them a way to get shares of soon-to-be-listed companies without having to suffer through the IPO scrum.

KakaoBank and Krafton have filed for initial public offerings and have been the targets of significant interest.

According to Stockplus Unlisted, KakaoBank was recently traded at 100,000 won per share, up from 75,000 won earlier this this year. Krafton is being traded at around 3 million won, up 70 percent from March.

Over-the-counter stocks on the K-OTC can be traded via brokerage apps like listed stocks. Trading hours are also the same as the operating hours of local stock market, from 9 a.m. until 3:30 p.m., with transactions executed when bids and offers match.

Trading in the K-OTC market can be risky as volume is low and price swings can be dramatic. If the companies preparing for IPOs end up canceling their plans or fail to list, their over-the-counter share prices can plummet.