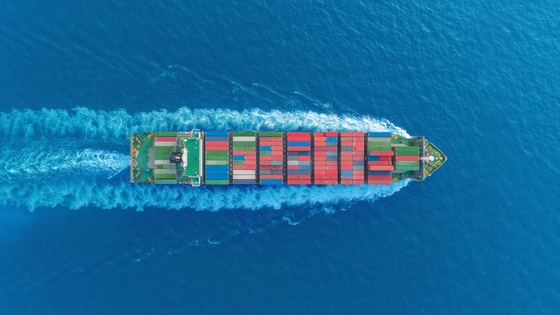 
Among Korean industries, shipping is probably one of the most experienced in navigating environmental regulations.

As the companies operate on the high seas, they are under the direct influence of global regulations set by the International Maritime Organization (IMO).

A United Nations body responsible for regulating international shipping, the IMO has been tightening emission rules since the early 1990s, when it started targeting various pollutants, including sulfur, nitrogen and carbon dioxide.

Until now, shippers have mostly responded to carbon regulations by increasing fuel efficiency or slowing vessel speed. But maritime regulations are sure to intensify in the next few years, and these methods will become increasingly challenged by international standards. This calls for the shipping industry to come up with a more fundamental approach: fuel.

"This raised concerns that reducing carbon through efficient ship operation has reached a limit. The only way to reach the 50 percent carbon reduction goal by 2050 is a paradigm shift to a carbon-free fuel source."

To meet that goal, the IMO announced the introduction of new regulations last October: the Energy Efficiency Existing Ship Index (EEXI) and the Carbon Intensity Indicator (CII). If they are adopted at the IMO's next annual Marine Environment Protection Committee in June, the new regulations will be effective from 2023.

EEXI and CII rate ships by energy efficiency and carbon intensity. Those whose grades fall below a certain point will have to take corrective action, like reducing speed. Ships that receive the lowest CII ratings of D or E for more than three years straight will be prohibited from operating.

The immediate task for shippers is to assess their operating fleets and make changes before the new policies are implemented, probably in January 2023.

The easiest way to reduce carbon dioxide emission is using less fuel. And the cheapest way to do that, without spending money on additional equipment, is slowing the craft.

The relation between vessel speed and fuel consumption is "an exponential one," the IMO explains. A 10 percent speed reduction can cut down fuel consumption by 27 percent. Unlike cars, ships sail through resistance from high waves, so the faster the goes, the more power they need to move forward.

Um Kyung-a, an analyst at Shinyoung Securities, said this was why global shipping supply was recently failing to meet booming demand as governments re-open borders: ships were operating at low speeds despite rising freight costs and low fuel prices.

"Shipping supply won't increase much for a while, as 30 percent of shippers will make aggressive investments while the other 70 percent take on the passive stance of reducing speed," she wrote in an April 30 report. "My anticipation is that this situation will extend to 2022, at least."

Another way of using less fuel is increasing fuel efficiency, which is how most shippers are preparing themselves. This can be achieved by various methods -- from changes as small as using silicon paint on the ship's body to reduce water resistance to installing energy-saving devices, adopting stronger propellers and optimizing operation schedules to match weather condition that could minimize fuel consumption.


Too early to buy new ships?

A more fundamental approach, of course, would be purchasing new fleets that run on alternative fuel.

Among newly placed ship orders over the past year, a popular option was liquefied natural gas (LNG)-powered ships. Compared to heavy fuel oil, LNG can reduce carbon emissions by around 20 percent.

The global demand for LNG ships has benefitted Korean shipbuilders, with orders surging this year as shippers prepare for stronger regulations-- especially the new IMO rule introduced last year that limits the sulfur content in marine fuel to 0.5 percent from the previous 3.5 percent.

Vessels that run on LNG require a certain degree of technological sophistication, which Korean companies have already proven by building and delivering LNG ships in the past. According to Clarksons Research, Korea took 70 percent of LNG ship orders placed globally between January and April.

Another reason environmental experts are against the idea of LNG becoming a fuel alternative is because it predominantly consists of methane, which is also classified as a greenhouse gas. If overconsumed, methane can do more damage to earth than carbon does as its heat-absorbing effect is around 30 times more over a 100-year period.

That is why LNG is generally viewed as a transitional phase before zero-carbon fuel.

"LNG-powered ships are high in demand at the moment because the level of technology for mass production, relevant policies and bunkering infrastructure have reached a certain point," said Prof. Lee of Pusan National University, adding he sees the popularity of LNG ships lasting until mid-2030s.

"But tech developments in carbon-free fuel engines and setting up infrastructure needed for those energy sources are very active at the moment," he said. "My expectation is that they'll become commercially available by 2030. From that point, they'll push down the share of LNG ships and by 2040 become the dominant fleet type."

Korean shippers, on the other hand, have not been very enthusiastic about investing in new LNG ships. A majority of LNG ship orders to Korean shipbuilders come from overseas clients. Compared to bigger global peers, domestic shippers have limited resources and the investment for LNG ships can be a hefty purchase given the murky future.

Vessels are delivered to shippers after two to three years of construction and afterwards are operated for at least 20 years. If a carbon-free fuel becomes the new shipping norm in the next 10 years, the decision to buy an LNG-powered ship today will immediately turn to sunk cost.

"We're in a different position from larger global players that have the resources to run a wide portfolio of ships and have LNG-ships as part of their lineup," said a local shipping company source who requested anonymity. "Attaching equipment to existing ships could take us through 2040 or even 2050. For us, placing new orders after the paradigm shift could be a better choice."


Search for the carbon-free marine fuel

Ammonia, hydrogen and biofuels made from plant or animal waste are the most frequently cited candidates for carbon-free shipping of the future. But global shippers and shipbuilders are still in the process of developing technology to use them as marine fuel and are comparing pros and cons to find the best alternative.

Hydrogen, for example, is not that expensive to produce as it is naturally generated in large volumes at petrochemical factories. But technology for hydrogen storage at the moment is not mature and too expensive to say it's ready for mass-scale supply. Hydrogen tanks on ships would have to be larger than LNG tanks. This is a negative factor for shippers, whose profitability is also linked to how much cargo they can load.

Ammonia on the other hand is relatively easier to store and transport, giving it higher points for stable supply and cost. It also takes up less storage space than hydrogen as it can be compressed more. As marine fuel, ammonia's price is still expensive compared to existing bunker fuel, but it is considered to be the closest to commercialization.

"A lot of countries are conducting research to develop ammonia as marine fuel, so there's a possibility that it could reach commercialization faster than expected," said Park Han-seon, Korea Martime Institute's secretary general and head of the maritime safety environment division.

"LNG-powered vessels will continue to be popular, but it would take a lot of money to transform them to run on ammonia afterwards. The smartest way for shippers, I think, would be ordering LNG-powered vessels that come with systems ready for ammonia fuel, even if it incurs additional costs for now."

Among global shippers, Denmark's Maersk is the most enthusiastic investor in carbon-free shipping, with R&D projects currently underway with ammonia, alcohol and biomass fuel. In March, the company announced it would introduce container ships that run on biofuel by 2023, which would be its first zero-carbon vessels. In Korea, current local leader HMM signed a partnership in August with Korea Bioenergy Association, Korea Shipbuilding & Offshore Engineering and Korean Register of Shipping to co-develop and test bio heavy oil as marine fuel.

For policy support, the Korean Ministry of Oceans and Fisheries announced a plan for ecofriendly shipping in December, which includes funding for tech development and replacing old ships with LNG vessels. The goal is to reduce greenhouse gas emission by 70 percent in the shipping industry and make 15 percent of the fleets ecofriendly by 2030.

But on top of the government's helping hand, experts say shipping and shipbuilding companies should join forces to stand up for themselves in international discussions that set maritime regulations.

"The only way to overcome this uncertainty is companies joining forces and collecting as much technical information they can to come up with a detailed plan," said MS Kim, a senior executive at the Korean Register of Shipping.

"These ideas should be suggested at international meetings, like the IMO or the Maritime Research and Development Board. Actively participating in those discussions will resolve uncertainty and in the long term help Korea grab the lead in carbon-zero technology.