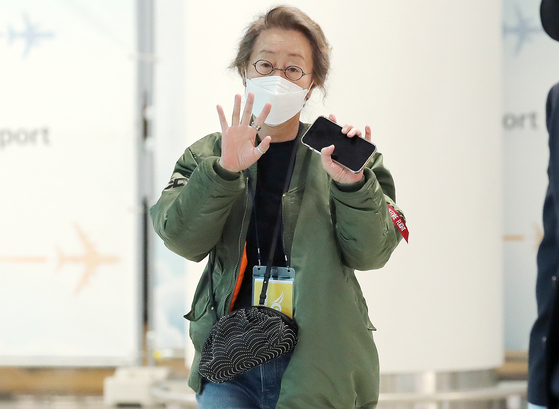 
Actor Youn Yuh-jung, donning a bomber jacket and blue jeans, waves to reporters at the Incheon International Airport on Saturday. Youn became the first-ever Korean actor to win an Oscar and made her triumphant return to Korea two weeks after taking the award in the U.S. for Best Supporting Actress for her role in the film “Minari.”

Youn didn’t hold a press conference or take interviews at the airport. Instead, she released a message Friday via her agency Hook Entertainment. The message reads, “My heart still flutters as the memory of winning the Oscar remains fresh. Again and again, I appreciate you for rejoicing with me and supporting me, which is more love than I deserve. Thanks to you, the joy of winning an Oscar has doubled, and I’m so happy day by day.”

Youn played the role of a non-stereotypical grandma in the film “Minari,” which tells the story of a Korean migrant family chasing the American dream in the 1980s, based on the story of the Korean-American director Lee Isaac Chung’s own family.