Russia, China are cozying up to North Korea

Russia, China are cozying up to North Korea 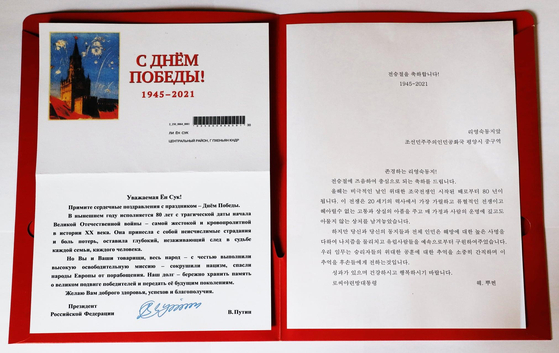 The Russian Embassy in Pyongyang revealed in a Facebook post Saturday a congratulatory message sent by Russia’s President Vladimir Putin to Ri Yong-suk, 105, a North Korean guerrilla fighter from the anti-Japanese struggle in the 1930s and 1940s, on the Victory Day anniversary marking the end of World War II. [RUSSIAN EMBASSY IN NORTH KOREA]


As the Joe Biden administration tries to bring allies South Korea and Japan closer together, Russia and China are showing signs of warmer ties with North Korea.

The Russian Embassy in Pyongyang revealed on Saturday that President Vladimir Putin sent a congratulatory message to Ri Yong-suk, 105, the last known surviving North Korean guerrilla fighter from the anti-Japanese struggle in the 1930s and 1940s. The message came to mark Victory Day, the end of World War II in Europe on May 8, 1945.

Ri had a close relationship with the Kim dynasty from the days of North Korean founder Kim Il Sung. She served as a member of the 88th Separate Rifle Brigade during World War II, known for incorporating Soviet, Korean and Chinese soldiers to fight against Japanese forces, alongside Kim Il Sung.

The embassy said that Putin described World War II as the “most heated, bloody war in the history of the 20th century” and lauded Ri and her comrades’ role in “liberating their people, defeating Nazism and saving Europeans from subordination.”

In 2005, Putin awarded medals to 17 anti-Japanese fighters including Ri at a celebration marking the 60th anniversary of the World War II victory. However, it is rare for the Russian president to send such a congratulatory letter. Ri is also the recipient of the highest awards in North Korea including the Order of Kim Il Sung and Order of Kim Jong-il. In March, current leader Kim Jong-un was reported in state media to have sent her a birthday message, stressing the continued close ties with the North Korean founder’s grandson.

A former high-level Seoul government official said Putin might have sent a message because of Ri’s advanced age. “However, there may be a political background to why he sent a congratulatory message to mark Victory Day and made it public,” he said.

He added that by reaching out to the anti-Japanese fighters, Russia could be working on “showing off friendly North-Russia relations.”

This comes as Pyongyang and Beijing have been suggested closer relations with reports that North Korea, after shutting its borders due to the Covid-19 pandemic since last January, will soon resume trade with its closest neighbor, China.

North Korean state media Saturday reported extensively on the launch of a photo exhibition Friday at the North Korean Embassy in Beijing to mark the third anniversary of leader Kim Jong-un’s visits to China.

The North’s state media reported that Song in his speech called for North Korea and China’s relations “to reach a new stage.”

Kim visited China three times in 2018, in March in Beijing, in May in Dalian in Liaoning Province and again in Beijing in June. Kim consulted Chinese President Xi Jinping ahead of his first summits with President Moon Jae-in and former U.S. President Donald Trump. Kim went onto meet Xi two more times in January 2019 in Beijing, and the Chinese leader reciprocated with a trip to Pyongyang that June. The first summit between Kim and Russian President Putin took place in April 2019 in Vladivostok.

Uriminzokkiri, a state-run propaganda outlet in Pyongyang, also published an English-language article Saturday marking the third anniversary of the Dalian summit and reported that leader Kim expressed happiness that North-China relations have “greeted a fresh heyday and undergone further development.”

Last week, the top envoys of Seoul, Tokyo and Washington held their first face-to-face trilateral meeting in a year on the sidelines of the Group of Seven, or G7, ministerial meeting in London, where they prioritized discussions of the North Korea denuclearization issue. The Biden administration recently completed a review of North Korea policy that calls for a “practical” approach and engagement towards the goal of denuclearization.

The G7 foreign ministers in a joint communiqué last week called on Pyongyang to “refrain from provocative actions and to engage in a diplomatic process with the explicit goal of denuclearization,” including to “resume inter-Korean dialogue.”

They also “committed to the goal of complete, verifiable and irreversible abandonment of all of the DPRK's unlawful weapons of mass destruction and ballistic missile programs” and expressed “grave concern” over its human rights violations, a matter Pyongyang has been sensitive about.

Changing the geopolitics of the peninsula