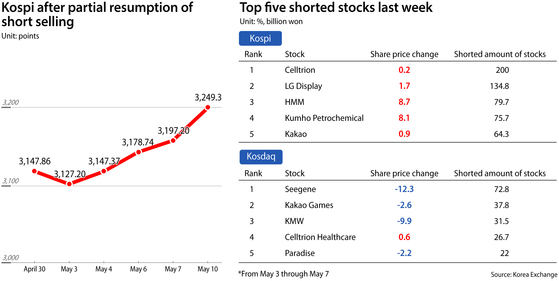 The sky didn’t fall as short selling was allowed again, despite some fears that the indexes would collapse once speculators got their chance.

The prohibition on short selling was lifted by the country's financial regulators from May 3 on Kospi 200 and Kosdaq 150 stocks. On the first day of trading under the new rules, the Kospi fell by 0.66 percent, but then prices recovered and rose for four consecutive trading days through Monday.

On Monday, the benchmark Kospi closed at a record high of 3,249.3 after breaking the 3,250 mark during trading.

Short selling is when an investor borrows stock and sells that stock immediately in hopes of buying it back later at a lower price, repaying the loan and profiting from the difference. The practice had been prohibited since March 2020 as stock prices plunged in Korea amid the coronavirus pandemic. Lifting the ban was delayed two times as retail investors objected to the resumption arguing it will pull down market indices.

"Clearing concerns that the market indices will be driven down once short selling is resumed, the market has been showing strong growth," said Shin Seung-jin, an analyst from Samsung Securities. "We believe that short selling will continue to have a limited impact on the stock market."

Among Kospi-listed stocks, Celltrion was the most shorted stock last week, with 200-billion-won ($180 million) worth of shares shorted, according to data from the Korea Exchange. Heavy shorting did not lead to a price decline.

Other top shorted stocks rose, with LG Display rising 1.7 percent and HMM 8.7 percent over the past week.

Some Kosdaq shares did suffer though.

The second and third most shorted stocks, Kakao Games and local network equipment maker KMW, fell by 2.6 percent and 9.9 percent, respectively, in the first week of the return of short selling.

"The share price ultimately traces prospects of a company's future growth," Shin from Samsung Securities said. "If investors have put their money into companies with positive growth prospects they don't have to fear impact from short selling."

The list of stocks available of short selling will be changed as the Korea Exchange reconstitutes the basket of stocks that make up the Kospi 200 and Kosdaq 150 every June and December.

The list of companies to be removed from and newly added to the two indices is likely to be disclosed by the stock exchange operator at the end of this month.

Brokerages are expecting SK Bioscience, which listed in March, as a highly likely candidate to newly join the Kospi 200 index.