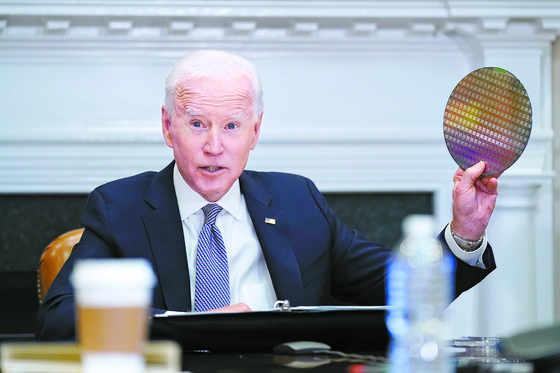 President Joe Biden holds up a silicon wafer as he participates virtually in the CEO Summit on Semiconductor and Supply Chain Resilience at the White House on April 12. [AP]


Samsung Electronics is under the gun ahead of a second chip summit after its competitors responded positively and aggressively following the first meeting while the Korean company hems and haws over its investment in Texas.


According to local press reports, the teleconference could be a good opportunity for Samsung Electronics to announce the finalization of its $17 billion semiconductor investment plan for Austin.


U.S. Commerce Secretary Gina Raimondo has scheduled a second meeting of major chipmakers and chip buyers for May 20, a day before the first summit between President Moon Jae-in and President Joe Biden, according to Bloomberg on Tuesday. It will bring together Samsung Electronics, TSMC and Intel, and major U.S. manufacturers hit by the ongoing global chip shortage.


The latest chip summit would come a month after a virtual gathering presided over by National Security Advisor Jake Sullivan, where the U.S. president called on the participating companies to ramp up production capacity of semiconductors on the U.S. soil.


The White House said the objective of the meeting is to foster “an open dialogue around semiconductors and supply chain matters,” according to the Bloomberg report.


After the last meeting, significant moves were made by some of the participants. Intel CEO Pat Gelsinger vowed to start producing chips for car makers. TSMC, the world’s largest contract chipmaker, is reportedly considering adding up to five new plants at a site in Arizona.
The Samsung Electronics' project remains under discussion with negations ongoing regarding tax credits for and employment at the massive project next to the company’s existing foundry factory in Austin.

"Parts suppliers affiliated with Samsung Electronics in Texas already believes the plan is almost a done deal,” said a source in the semiconductor equipment industry, indicating that the negotiation has inched closer. “Still, I’m not sure when the announcement could be made, since there are a wide range of factors to be taken into account.”


Another area of focus is whether the issue of a disrupted supply chain for semiconductors will find its way into the agenda of the U.S. – Korea summit, which is scheduled to be held in Washington on May 21.


The Korean government only confirmed denuclearization on the Korean peninsula as an item for discussion.


In the meantime, the Moon administration is set to announce increased tax credits for building chip facilities and research centers to bring in more semiconductor facilities to Korea in a briefing set for May 13.