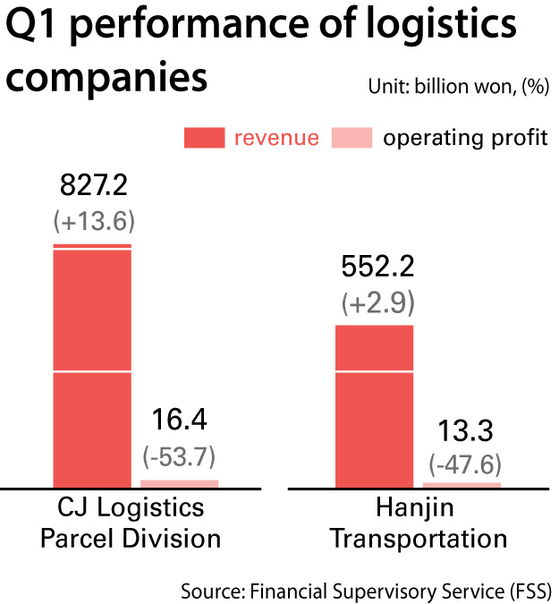 Despite the e-commerce boom, their income is dropping due to higher maintenance and labor costs and the need to meet the increasing demands of customers who want everything now.

CJ Logistics, the country’s largest logistics company, delivered 436.2 million parcels during the first quarter, up 12 percent on year, with sales of its parcel delivery division up 13.6 percent to 827.2 billion won ($735.6 million).

“We do have high sales, but eventually lose money,” said a spokesperson for a logistics company. “It’s hard to even maintain an operating profit increase of 2 percent.”

Higher costs for operating trunk-line trucks, the large 11-ton trucks that travel between delivery centers, is one factor. One-way delivery on such vehicles averaged 220,000 won last year, but increased to 280,000 won this year. The Ministry of Land, Infrastructure and Transport (MOLIT) is reluctant to permit more trunk-line delivery trucks, which could cause costs to further increase.

“With e-commerce business flourishing and people developing higher standards for deliveries, logistics firms now have to spend hundreds of billions of won on investment,” said a spokesperson for one of the logistics companies. “People think an increase in delivery volume means that companies are enjoying high profits, but in reality, its different.”

Critics argue that the companies are partly to blame. They should have seen trouble ahead and made the right investments.

In the past, logistics companies were focused on building more warehouses rather than improving parcel delivery systems. Delivery workers overworking to sort parcels was a chronic problem in the industry, but it fell between the cracks as neither the logistic companies nor the e-commerce companies wanted to take responsibility.

Dealing with many long-standing problems all at once, companies are left to grapple with high costs.

“CJ Logistics is currently negotiating to increase parcel delivery prices with over 90,000 clients,” said Lee Han-joon, an analyst at KTB Investment & Securities. “Companies will continue with their attempts to raise delivery fees.”