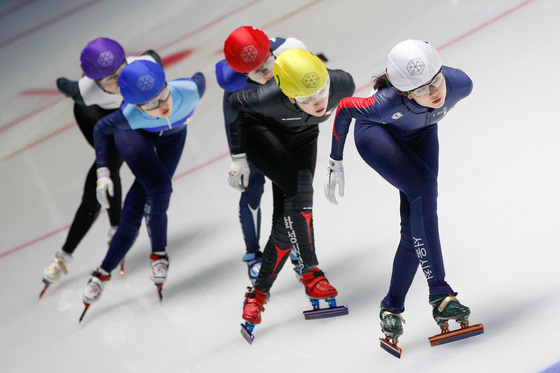 Shim Suk-hee, far right, leads the group during the 1000 meter race at the national team selection competition held at the Taereung International Rink in northern Seoul on May 6. [NEWS1]


The eight male and eight female members of the Korean national short track team were named on Sunday, with the top five of each gender going on to compete at the 2022 Beijing Winter Olympics next year.

The five Olympic female short track skaters are Shim Suk-hee, Choi Min-jeong, Kim Ji-yoo, Lee Yu-bin, Kim A-lang in order of their national team selection competition ranking. Seo Whi-min doesn't go to the Olympics but will compete at World Cup events, while Park Ji-yoon and Kim Gil-li will train with the squad and act as substitutes if needed.

Choi topped the table in the first round and Shim in the second of the national team qualifications, both earning a total of 99 points. As the second round takes precedence over the first, Shim sits at No. 1.

She added another gold medal in the 3,000 meter relay event alongside teammates Kim Ye-Jin, Lee Yu-bin, Kim A-Lang and Choi at the 2018 PyeongChang Games.

Shim has held the world record of one minute and 26.661 seconds in the 1,000 meter race since the 2012 ISU Short Track Speed Skating World Cup in Calgary, Canada.

If there's anybody who rivals Shim in the record books it is Choi, the world record holder in the 1,500 meter race with two minutes and 14.354 seconds. Choi has two Olympic gold medals, three world championship medals and 39 ISU World Cup gold medals to her name.

Team Korea hopes to take gold in all nine short track events at the 2022 Beijing Olympics.