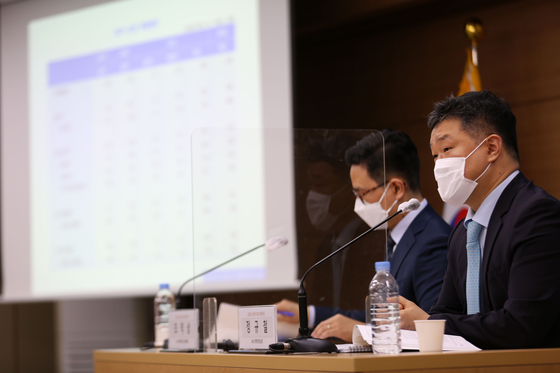 KDI officials including Jung Kyu-chul, head of the KDI's macroeconomic analysis and forecasting office, right, annoucnes its economic forecast for this year at the government office in Sejong on Thursday. [YONHAP]

The Korea Development Institute (KDI) raised its growth outlook for this year from 3.1 percent to 3.8 percent.

However, a sluggish vaccine program and weakness in the domestic market continue to be major risks to robust growth.

A recent rise in inflation -- both in Korea and in other major countries including the U.S. -- is another because it may force central banks to adopt tighter monetary policies.

The KDI’s updated forecast is higher than those of several international institutions including the International Monetary Fund (IMF), which predicts 3.6 percent growth, and the Asian Development Bank (ADB), which predicts 3.5 percent. It was lower than the 4 percent predicted by President Moon Jae-in during a press conference earlier this week.

The KDI's forecast for growth in exports was raised from 3.1 percent to 8.6 percent. But its forecast for the domestic economy was far less rosy and downgraded in some areas.

Total spending is expected to grow 2.5 percent by the end of the year, which is a drop from 3.3 percent projected previously.

The consumer spending projection was slightly raised from 2.4 percent to 2.5 percent.

Jung Kyu-chul, head of the KDI's macroeconomic analysis and forecasting office, did not rule out the possibility of the economy growing faster than the institution’s forecast.

“Economic growth higher than 3.8 percent could be possible if faster inoculations for Covid-19 vaccine could happen,” Jung said.

Korea’s inflation in April rose 2.3 percent, the highest in more than three and a half years. The last time inflation rose at such a rate was in August 2017, when it was up 2.5 percent.

It was the first time since November 2018 in which inflation was above 2 percent.

Signs of inflation were first detected with commodity prices surging. Crude price  hikes have been the driving force of inflation recently.

The international crude price is currently around $60 per barrel, double a year ago.

The KDI, however, said the possibility of excessive inflation in Korea is unlikely, noting that this year’s forest is even lower than the Bank of Korea’s target of 2 percent.

“Most of the inflation that exceeded 2 percent was largely due to relatively lower inflation last year,” Jung said. “It would likely be lower than current inflation in the third or fourth quarters.”