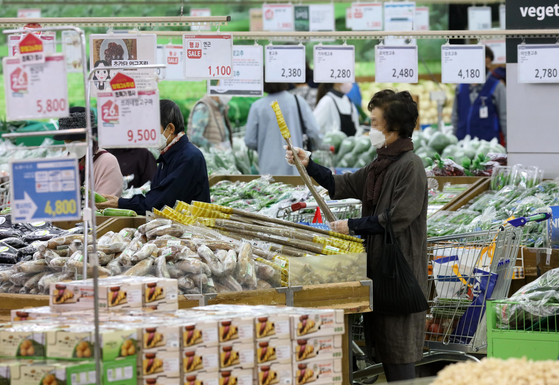 People shopping for groceries at Hanaro Mart in Yangjae, Seoul, on Tuesday. Consumer prices rose at its sharpest rate in more than three years, increasing burden on consumers. [YONHAP]

The specter of inflation is back as consumer prices rose at the fastest pace in more than three and a half years.

According to Statistics Korea on Tuesday, consumer prices in April rose 2.3 percent year-on-year, the sharpest increase since August 2017's 2.5 percent.

It was the first time since November 2018 for inflation to be over 2 percent.

This is a stark contrast to last year when Covid-19 drove down consumer prices.

Rises in consumer prices remained below 1 percent throughout 2020 except in September, when they rose 1 percent.

Price increases in April were driven by two major factors – rises in agriculture and fishery products as well as international crude prices. 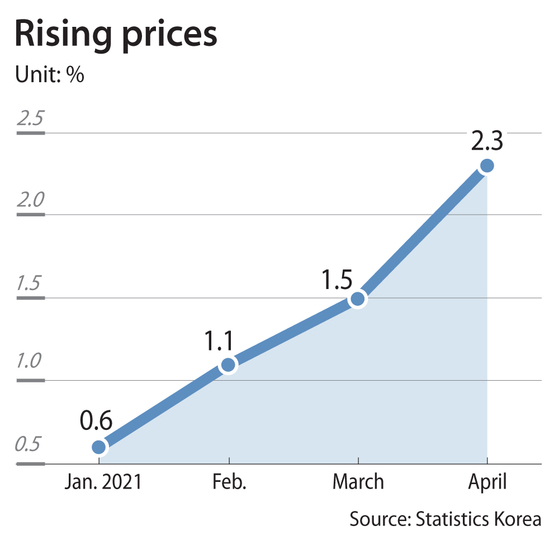 Fresh produce prices were affected by unusual weather. Poultry and egg prices were driven by the spread of avian flu.

The price of leeks grew 270 percent compared to a year ago, dipping slightly from a 305.8 percent year-on-year hike in March.

The last time leek prices saw such significant increases was in April 1994, when they surged 821.4 percent

Low petroleum prices were a key factor in keeping consumer prices from going up. Even in March, they only grew 1.3 percent year-on-year.

Due to higher international crude prices, the prices of manufactured goods grew 2.3 percent in April, stronger than the 0.7 percent growth in March, which was the first time in 11 months in which manufactured good prices saw a year-on-year increase.

Core inflation, which excludes seasonally sensitive items such as fresh produce and oil, saw the sharpest growth since November 2018. In April core inflation was up 1.4 percent year-on-year.

“International crude prices continue to rise and there are growing expectations of an economic recovery,” said Eo Woon-sun, a statistics agency official.

There are growing concerns about inflation as the Korean economy recovers from Covid-19.

Excessive liquidity caused by the loose monetary policy has lowered the value of the Korean currency.

To combat inflation, the central bank usually tightens monetary policy. But in April, the Bank of Korea kept interest rates at an all-time low. The base rate of 0.5 percent has remained unchanged for nearly a year. The last change was in May 2020, when it was lowered to 0.5 percent.

BOK Gov. Lee Ju-yeol downplayed fears of inflation. In March, Lee said while there were inflationary forces growing, it was still too early to raise interest rates due to uncertainties related to Covid-19.

That sentiment was shared by Vice Finance Minister Lee Eog-weon, who predicted that consumer prices will stabilize in the second half of the year.

Inflation hits 13-year high as prices up across the board