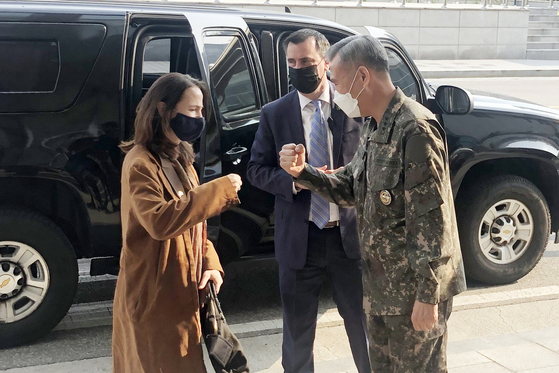 His meeting with the Japanese leader comes as the U.S. director of national intelligence kicked off a three-day visit to Seoul, ahead of the first Korea-U.S. summit next week since U.S. President Joe Biden took office.

Park, director of South Korea's National Intelligence Service (NIS), relayed to Suga that the relationship between Seoul and Tokyo “cannot continue this way,” according to diplomatic sources Thursday, urging for a normalization of bilateral ties.

Last November, Park met with Suga at his residence in Tokyo, becoming the first high-ranking Korean official to meet the new Japanese prime minister, who was inaugurated in September. Park at that meeting conveyed Korean President Moon Jae-in’s intent to normalize Seoul-Tokyo relations, which have been strained by historical disputes including the compensation of forced labor victims and the Japanese military’s wartime sexual slavery issue. The two also are in a trade spat over Japan's export restrictions on Korea.

The NIS has declined to comment on Park’s trip to Japan.

Washington has pushed for stronger trilateral coordination with Seoul and Tokyo, its closest allies in the region, which has been hindered by the two countries' frayed bilateral relations. Along with coordinating on Pyongyang policy, the United States could also urge allies to take a stronger stance amid intensified Sino-U.S. tensions and China’s increased assertiveness in the Indo-Pacific region.

Haines arrived in Seoul Wednesday afternoon after a two-day trip to Tokyo.

On Thursday, Haines visited the demilitarized zone at the inter-Korean border, according to diplomatic sources. The U.S. spy chief was reported to have toured the Joint Security Area in the truce village of Panmunjom — an opportunity to witness firsthand the division of the Koreas, which in itself sends a message to Pyongyang.

Haines was also expected during her three-day day visit to pay a courtesy call on President Moon Jae-in and meet with Moon's national security adviser, Suh Hoon, an opportunity to discuss the Biden administration’s North Korea policy among other issues.

Her visit to Seoul comes ahead of the first bilateral summit between Moon and Biden set for May 21 in Washington.

Despite the U.S. sky chief’s schedule usually being kept private, Haines has been photographed several times by Korean press during the visit.

She was also expected to visit U.S. troops in Korea and check on surveillance assets.