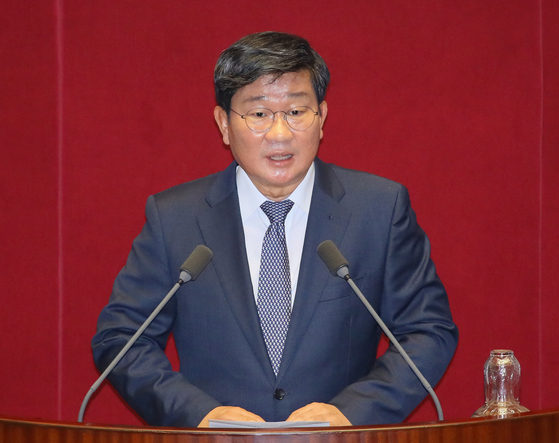 
For the first time since Korea's democratization in 1987, the ruling party now chairs all 18 of the National Assembly's standing committees, following Thursday's election of one of its members to the final vacancy at the head of the Intelligence Committee.

Rep. Jeon Hae-cheol of the Democratic Party (DP) was elected as the new chairman in a voting session boycotted by the main opposition United Future Party (UFP).

National Assembly Speaker Park Byeong-seug opened the morning voting session to allow the election of the committee. While the DP, minority opposition parties and independent lawmakers participated in the voting, the UFP declined to participate in the session — a continuation of its stance since negotiations between the two top parties broke down last month. 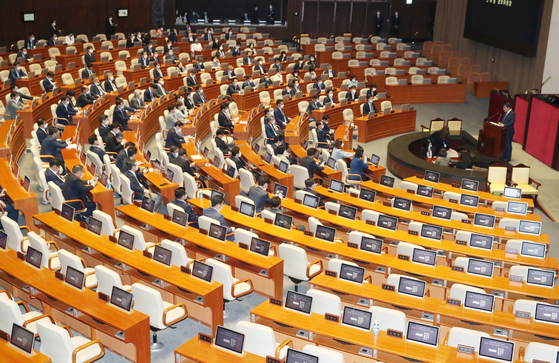 The seats of the United Future Party (UFP) lawmakers are empty as the main opposition party boycotted the Intelligence Committee chairman election on Thursday. [YONHAP]


Jeon, a three-term lawmaker, secured 176 out of 177 votes. Park stressed that Jeon was legitimately elected as the Intelligence Committee chairman based on the National Assembly Act.

Although the UFP did not attend the voting, floor leaders of the DP and the UFP had previously agreed to elect Jeon to the post. “The UFP knew that the election was taking place. They just didn’t participate,” a key member of the DP told the JoongAng Ilbo.

Last month, the DP used its majority of 176 lawmakers in the 300-member legislature to elect 17 of its lawmakers to chair standing committees during two separate plenary sessions boycotted by opposition parties. Elections to six committees were held on June 15 and the rest were elected on June 29.

The DP was unable to secure control of the National Intelligence Committee because the law requires an agreement between the DP and the UFP to assign committee members and hold the election.

The UFP previously said appointing committee members without consulting the deputy speakers was a violation of the law.

The National Assembly has two deputy speakers, and the DP already elected Rep. Kim Sang-hee to one of the posts. The other seat is reserved for the UFP. The main opposition party refused to nominate a candidate, leaving the post vacant as of Thursday.

The DP asked the National Assembly Secretariat to interpret the law more loosely to form the committee. The secretariat made an unprecedented decision, deeming it acceptable to consult with just one of the deputy speakers, according to a DP official, rendering Jeon the first Intelligence Committee chairman elected without consensus of both deputy speakers.

“It is unfortunate that the UFP did not attend the voting today,” Jeon said after his election.

Taking into account the classified nature of the panel's work, the Intelligence Committee only has 12 members. In the 21st National Assembly, eight are DP lawmakers and four are from the UFP.

The first task of the Intelligence Committee will be the confirmation hearing of President Moon Jae-in’s nominee to head the National Intelligence Service (NIS). Last week, Moon named Park Jie-won, a former four-term lawmaker, as the new NIS head. 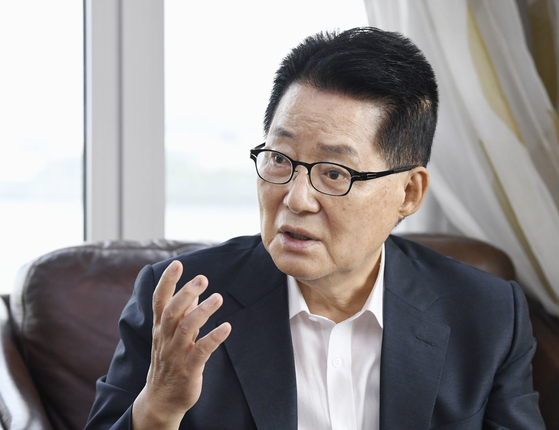 
The UFP already formed a team of advisors including North Korea experts who will help scrutinize Park. Floor leaders of the UFP and the DP have agreed that they will schedule the confirmation hearing as soon as possible.