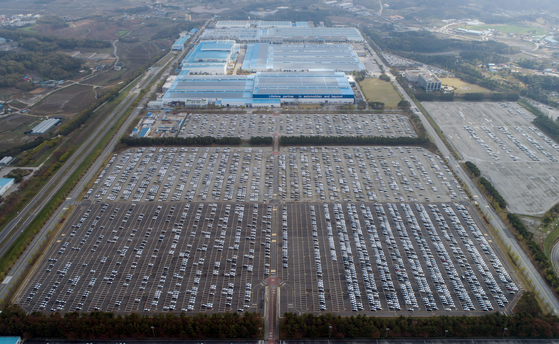 Hyundai Motor's Asan factory which was shut down last month due to semiconductor shortage. [YONHAP]

The global semiconductor shortage is continuing to take a toll on automakers in Korea.

Kia, the country's No. 2 automaker by sales, has decided to partially shut down its factories for the first time due to the ongoing chip shortage.

Kia said it has decided to suspend its No. 2 Sohari factory in Gwangmyeong, Gyeonggi for two days from May 17 to 18 due to a lack of airbag control units, which detect accidents and activate safety equipment.

Hyundai Motor will also shut down some of its production lines at the Ulsan factories for the same reason.

Its No. 5 Ulsan plant will be suspended for two days from May 17 to 18, disrupting production of some of Hyundai Motor's flagship lines including the midsize Tucson SUV and hydrogen fuel cell Nexo SUV.

Its No. 3 plant is also likely to be shut down on May 18, but that decision has not yet been confirmed, the company spokesman said Sunday.

Last month, Hyundai Motor shut down its Asan factory from April 12 to 13 and from April 19 to 20, disrupting production of its bestselling Grandeur sedan and Sonata.

The two automakers have been releasing vehicles without certain functions that require semiconductors to try and avoiding halting production completely.

Kia, for example, recently released a hybrid version of the K8 sedan that doesn't come with selected safety and driving assistant functions such as the remote parking function, and instead offering a discount of 400,000 won ($350) or so.

"The latest delay in car deliveries derive from auto chip shortage," said Yoo Won-ha, head of domestic sales, in a written apology sent to customers. "We will do our best to deliver the vehicles by finding a substitute supplier for semiconductors and managing production schedule more effectively."