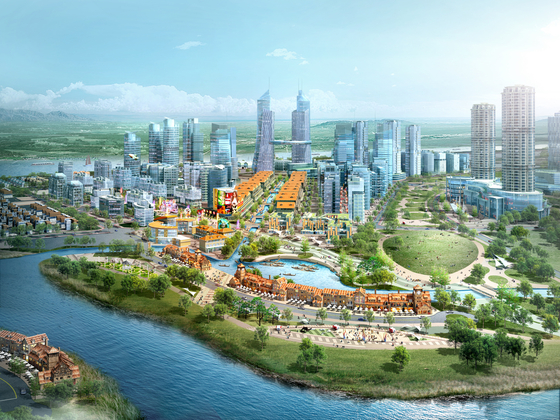 
Since the Korean government set a goal of carbon neutrality by 2050, the importance of green remodeling, which improves energy efficiency through changes in the materials used in and the designs of existing buildings, and smart city development have become trends.

One of the major projects underway is a Korea Water Resources Corp. (K-water) residential testbed dubbed the Smart Village, which is scheduled for completion by December this year.

While there are other smart-city projects in progress, the Smart Village is expected to be the nation’s first real residential area that is fully self-sufficient with renewable power.

The Smart Village, which is located in the southwest corner of a massive piece land near Gimhae Airport and sits on the Nakdong River, was still under construction during a visit in April.

According to K-water, the Smart Village will apply some 40 innovative technologies, including artificial intelligence, big data analysis, robotics and the Internet-of-Things (IoT), which will be incorporated into all 56 housing units that will be built.

Residents will be able to switch on and off TVs and air conditioners through voice commands to a robot, coordinate their wardrobes with a digital display operated through motion sensors or get a daily workout or a medical checkup via a digital display.

But the true strength of the Smart Village is that the entire cul-de-sac neighborhood is designed with carbon neutrality as its goal from the get go.

“Once completed, the Smart Village will be the country’s first true net-zero residential neighborhood with the government energy efficiency grade of 1, the first in the country,” said K-water general manager Ryu Min-ho, K-water’s general manager of the Busan Eco-Delta City project office.

According to K-water, the residential building and community center have applied both passive designs and active strategies.

Through active strategies, the housing units use renewable energy and energy storage systems. This includes entire roofs made of solar panels and a hydrothermal system developed by K-water in the heating system.

The renewable energy sources will also be used in a smart farm, which allows the residents to grow their own organic produce.

However, in case of emergency, the Smart Village will still be connected to Korea Electric Power Corp.’s power grid.

The 56 residents can live for five years in the village for free, which drew huge attraction when it randomly picked applicants last year. However, the data accumulated on the technologies from the residents will be used as the foundation for K-water’s larger Busan Eco-Delta Smart City, which will cover 11.7 square-kilometer area.

According to K-water, Busan Eco-Delta Smart City since its initial planning was focused largely on utilizing the Nakdong River water resources in creating an environmentally-friendly city.

The AI-operated system will not only manage the water quality but also help safety during flooding and times of drought. Its eco-filtering system will prevent pollutants from entering the water.

Water used, including for washing dishes and bathing, will be recycled.

The water resources will also be used for scenic purposes and tourism, which the company hopes will contribute to raising the living quality of the city's residents.

“Busan Eco-Delta Smart City, which started in 2012, was initially focused on the environment,” said K-water general manager Ryu. “The smart technologies were added in 2018.”

Busan was one of the two cities that were designated by the Moon Jae-in government as testbeds for Korea’s smart cities in 2018.

The other is Sejong. While Sejong is focused heavily on artificial intelligence, including Naver’s Data Center being built in the city, Busan is focused more on the environment.

Reaching carbon neutrality can’t be achieved without reducing carbon emitted by buildings, which is a major contributor.

This failure has largely been the result of an increase in carbon emissions in buildings.

The direct greenhouse gases emitted by construction machinery is only 7 percent, the rest is largely due to electricity use and heating.

The older the building the more carbon emissions are created. As of 2018, 67.2 percent of the building in the country were 15 years old or older.

The World Economic Forum’s 2021 report suggests the key to net-zero is reducing carbon emissions in cities, which account for 40 percent of global greenhouse gas emissions.

Last year in announcing carbon neutrality by 2050, the government proposed a two-track approach in reducing carbon emissions created by the building sector.

One is to apply zero-energy standards on new public buildings. This standard will be expanded to large private buildings with gross floor area of 5 million square-meters or larger starting 2030.

For old buildings, the government will encourage green remodeling through incentives, including tax cuts and grants.

“Current mitigation policies in the building sector in Korea focus on reducing energy consumption in apartment buildings, the most common housing type in Korea, and enhancing energy efficiency in lighting and home appliances,” the government report on carbon neutrality released in December stated. “The zero-energy building project is currently underway to promote the construction of green buildings that are powered and heated by renewable energy sources and have the maximum insulation performance that lowers the energy demand.”

The government stated that past strategies for improving energy efficiency have achieved “remarkable progress.”

One of the approaches the government is pushing that is both cost effective and less time consuming in reducing carbon emissions is green remodeling.

Without having to completely start from scratch or completely demolish the building, energy efficiency can be improved by using materials that optimize energy conservation and installing solar panels.

Last year, when the government announced the investment of 37 trillion won in the Green New Deal, 5.4 trillion won was set aside for green remodeling.

This year, the government announced that it is green remodeling 1,000 public buildings as well as 83,000 government-leased apartment units.

The public buildings include government-run daycare centers, welfare centers and medical centers that are more than 10 years old.

The government has set a budget of 227.6 billion won for green remodeling, which is the same as last year.

According to the government, last year a daycare center in Gwangmeyong, Gyeonggi, which had undergone green remodeling was able to reduce energy consumption 88 percent. The day care center was able to save 5.2 million won on energy costs annually.

“Not only will green remodeling help combat climate change, it will create jobs that have been lost from Covid-19 and improve the quality of lives especially for those in the vulnerable class,” said Ra Jin-sung, KTB Investment and Securities analyst.

Experts say smart cities are not a choice but an inevitable direction especially due to the rapid acceleration of urbanization, which is becoming a major global issues.

“Many people tend to focus on the advanced technologies when they think of smart cities,” Hwang said. “While the technologies – artificial intelligence, big data and IoT -- are groundbreaking and play a significant role, these are tools.”

He said smart cities are about breaking down barriers and sharing data in optimizing solutions.

This includes using weather data to determine the effective distribution of energy or solving traffic congestion.

“The reason U-city failed is not because of technology,” Hwang said. “It was because it failed to effectively share and incorporate different data in solving problems.”

U-cities, or ubiquitous cities, are considered the predecessor to today’s smart cities. The idea of incorporating technology to more effectively manage infrastructure first surfaced in the early 2000s, and under the Lee Myung-bak administration the concept of U-city was born.

Cities such as Incheon and Jeju aggressively promoted a transformation into a U-city driven by IT technologies.

The importance of smart cities was highlighted recently in Texas.

While the relatively high dependence on renewable energy, where wind power contributes 23 percent of the state’s energy, was considered to have had a devastating impact on the state, the isolated power grid was also blamed.

The severe winter storm left more than 4.5 million homes and businesses without power or heat.

The blackout even affected a Samsung Electronics plant in Austin as it was forced to shut down. It took the plant six weeks to recover.

“The focus of a smart cities is to strengthen the adaptability to an unexpected situation such as predicting a weather change and its impact on the supply of renewable energy and quickly converting to other energy sources so that the city wouldn’t face a major energy crisis,” Hwang said.

Rapid urbanization is also raising the need for smart cities.

A World Bank study found some 55 percent of the world’s population is living in cities. And this figure is expected to rise to 70 percent by 2050.

With more people flowing into cities, the rapid acceleration of urbanization is expected to bring about major challenges not only economically but also in other major areas, including deteriorating living quality and also pressure on the environment.

The problem of rapid acceleration of urbanization was vividly exposed with Covid-19.

“It is impacting not only public health but also the economy and social fabric. Simultaneously a health crisis, social crisis, and economic crisis, Covid-19 is laying bare how well cities are planned and managed and the impact this is having on the extent to which each city is able to function – or not – especially during times of crisis,” the World Bank report stated.

The Korean government last year laid out a plan in which the government will invest 10 trillion won in smart cities by 2025, creating 150,000 jobs.

“Cities with closely connected networks of big data and advanced hydrogen technologies, ICT and transportation systems could provide numerous opportunities in achieving carbon neutrality of the building sector,” the government December report on carbon neutrality stated. “Future smart cities tightly linked to advanced ICT are expected to offer real-time information of where surplus energy is being produced so that the extra energy could be used where it is most needed.”

The Korean government’s smart city ambitions are not limited to Korea.

The goal is to create a K-city network. The program not only provides help in creating a smart city master plan but also Korea’s smart city solutions, including technology consulting.

According to the government, some 23 foreign governments and public institutions have applied for the K-city program.

Asia-Pacific is expected to lead in smart cities as the region is fast urbanizing.

Experts say in order to truly move forward with smart cities, the government needs to be more aggressive.

“Countries around the world are working on reducing carbon emission,” said Kim Jeong-ju, researcher fellow at Construction and Economy Research Institute of Korea. “Existing infrastructure heavily consumes energy and contributes to carbon emissions. The government needs to be more aggressive in establishing a smart infrastructure.”