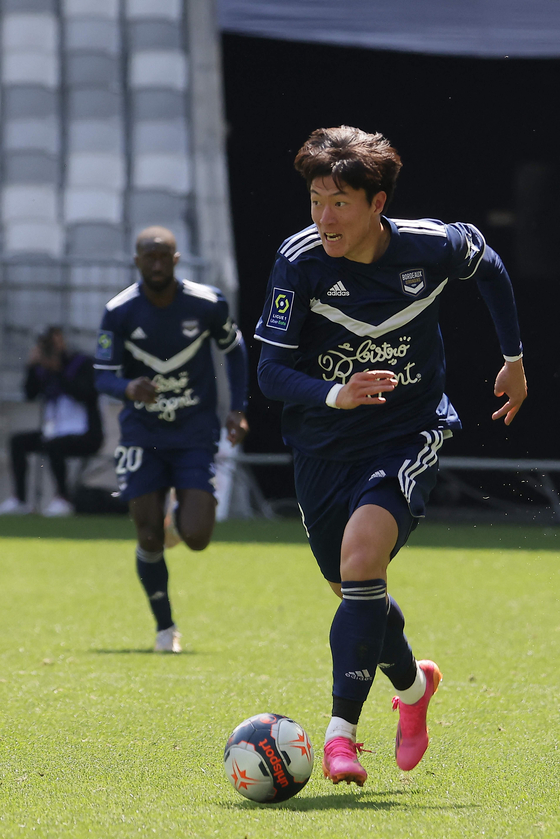 Bordeaux forward Hwang Ui-jo drives the ball during the French Ligue 1 football match between Bordeaux and Stade Rennais in Bordeaux, France on May 2. [AFP/YONHAP]


Hwang Ui-jo, the Korean star forward of French club Bordeaux, could be on the move this summer.

Hwang was named in the "Five Ligue 1 stars to look out for this summer" article published on the official Ligue 1 website over the weekend, highlighting five key players who could change teams after the season finishes next week.

Hwang's inclusion on the list comes as a bit of a surprise, as he currently has two years left on a four-year deal with Bordeaux and is set to finish the 2020-21 season as the team's highest scorer.

"One of very few rays of sunshine in a dreadful year for Bordeaux, Hwang has scored 11 league goals in a team that has been sucked into the relegation battle in the second half of the season," the Ligue 1 article said.

Hwang joined Bordeaux in 2019 from Japan's Gamba Osaka, where he played for two seasons after starting his career in Korea with Seongnam FC.

"Former Gamba Osaka man Hwang understandably needed some time to adapt to the European game following his arrival at the start of last season and he netted just six goals in his first campaign in Ligue 1," the article said. "He started this season in sluggish fashion too before finding his form in mid-December and never looking back - he has netted all of his 11 goals this season in his last 22 appearances."

Hwang seemed to struggle in his first season under Portuguese manager Paulo Sousa, who regularly played the Korean forward in an unfamiliar position on the wing. Sousa was replaced by Jean-Louis Gasset last year, and Hwang seems to have benefitted from the change, scoring 11 goals in 34 games this season, leading Bordeaux by some distance, as the next highest scorer has just four goals to his name.

Despite this success, the Ligue 1 website still thinks there's a chance Hwang could be on the move.

"The Korean star penned a four-year deal on his arrival," the article said, "but given Bordeaux’s struggles on and off the field, they may not be able to resist any incoming offers for Hwang this summer."

Bordeaux was placed in administration last month. The combination of the loss of revenue from ticket sales caused by Covid-19 and the bankruptcy of TV rights' holder Mediapro created serious financial issues for the club, with problems worsening when American owner King Street said it would no longer support the club financially.

Selling star players like Hwang could be the way to make some money quickly, especially if bigger and wealthier clubs take an interest.