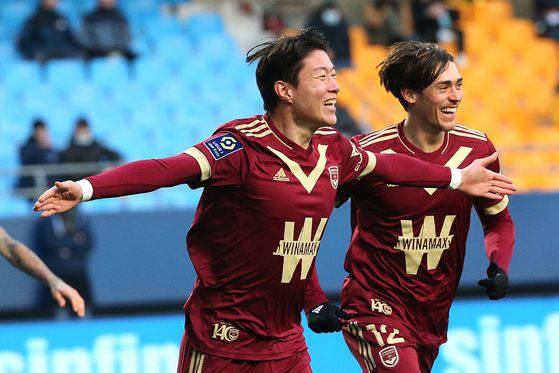 Bordeaux's Hwang Ui-jo celebrates after scoring his team's second goal during a Ligue 1 match against Troyes at Stade de l'Aube in Troyes, France on Sunday. [AFP/YONHAP]


After two months on the sidelines with ankle and hamstring injuries, Bordeaux striker Hwang Ui-jo has returned in style this month, picking up two goals and an assist in his first three starts since October.

Hwang headed in his sixth goal of the season on Sunday to lead Bordeaux to a 2-1 victory over Troyes. His goal turned out to be the decider, putting Bordeaux ahead after an early Troyes goal and an own goal that tied the score at 1-1.

Hwang's performance on Sunday underlined his emphatic return from injury over the last few weeks. Hwang initially suffered an ankle injury during a game against Nantes on Oct. 17. While rehabilitating, he also injured his hamstring, forcing him to spend the best part of two months off the pitch.

He initially rejoined the squad on Nov. 28, playing 23 minutes in a 2-1 loss to Stade Brestois, before picking up his first start against Strasbourg on Dec. 1.

Hwang scored in that game against Strasbourg, heading in a seventh minute goal to put Bordeaux ahead early, although the team went on to leave 5-2. Five days later, Hwang picked up an assist against Lyon on Dec. 5, before returning a week later to use his head to get the job done against Troyes.

That explosive return from injury has almost doubled Hwang's season stats in just two weeks: He now has six goals and two assists for the 2021-22 Ligue 1 season, suggesting that this is likely to be his most productive season ever.

The speed at which Hwang racked up those goals is even more impressive considering that he did not actually appear in the majority of those games this season.

The French league also highlighted Hwang's achievements this year on the official Ligue 1 Twitter account on Monday. According to the post, Hwang has scored 16 Ligue 1 goals so far this calendar year, making him the highest-scoring Bordeaux player in a single calendar year since Fernando Cavenaghi in 2008. 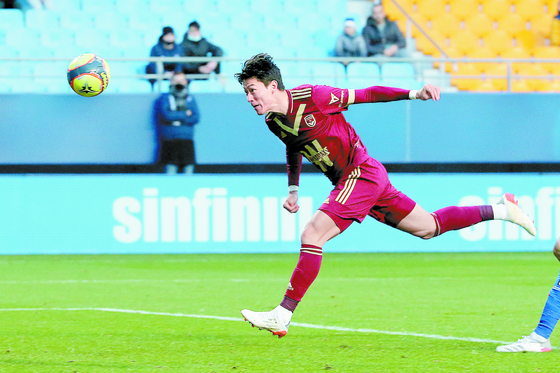 Hwang Ui-jo scores his team's second goal during a Ligue 1 match against Troyes at Stade de l'Aube in Troyes, France on Sunday. [AFP/YONHAP]


Hwang's success over the last couple of years may be due to his increasingly versatile style of play.

So far this season, Hwang has scored three goals with his dominant right foot, one with his left foot and headed in two, both this month. Compared to last year, when Hwang scored six goals with his right foot, three with his left, one header and three penalties, it's clear that the Korean forward is increasingly confident shooting with both feet and using his entire body offensively.

That shift may be part of Hwang's gradual adaptation to playing in Europe. Earlier in his career, while playing for Korea's Seongnam FC and Japan's Gamba Osaka, headers were a more common part of Hwang's arsenal. When he moved to Bordeaux in 2019, his style shifted to more strongly favor his right foot, likely in response to facing stronger defenders in the French league.

Hwang now appears more confident and is playing a more physical game, and his numbers so far this season have benefited as a result.

Hwang has a couple more chances to add a few more to his 2021 tally later this month. Bordeaux will take on Les Jumeaux M'Zouasia in the French Cup on Sunday, before facing Lille in their final Ligue 1 match of the year on Dec. 22.