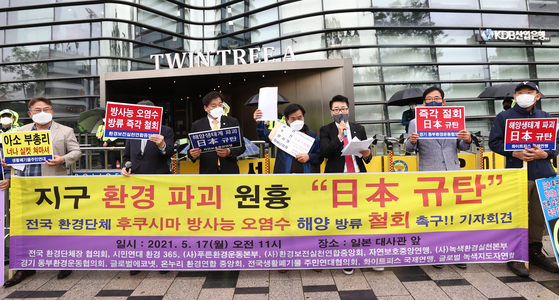 Environmental activists condemn the Japanese government's plan to release contaminated water from the Fukushima nuclear power plant at a rally in front of the Japanese Embassy in central Seoul Monday. [YONHAP]


Pressure from the Joe Biden administration may be bringing some reconciliation between Korea and Japan.

Ahead of the first summit between President Moon Jae-in and U.S. President Biden on Friday, Seoul is pushing for bilateral consultations with Tokyo on the planned discharge of contaminated water from the Fukushima nuclear power plant into the ocean, a break from a harder stance on the matter.

Seoul’s Ministry of Foreign Affairs said Sunday that bilateral consultations between Korea and Japan on the Fukushima issue are necessary, which would be "separate from a verification process through the International Atomic Energy Agency (IAEA)." Korea has been trying to ensure that Korean experts will take part in the IAEA's monitoring of the Fukushima water release.

The Asahi Shimbun reported Sunday, citing Japanese and Korean diplomatic sources, Japan is set to accept a Korean proposal to establish a forum to discuss safety issues surrounding its decision to discharge contaminated water from the crippled Fukushima nuclear plant into the ocean.

Japan’s Agency for Natural Resources and Energy, an arm of the Ministry of Economy, Trade and Industry, is expected to be among agencies to partake in such consultations, according to the sources. Japan's trade ministry is overseeing the decommissioning of the stricken plant.

The Korean government wants experts to join the consultative body, not just diplomats.

A massive earthquake and tsunami struck Japan on March 11, 2011, causing a meltdown at the Fukushima plant. More than 1.25 million tons of contaminated water is stored in over 1,000 tanks at the plant. The tanks are expected to be filled to their capacity by autumn 2022.

On April 13, Tokyo announced  that in two years it would gradually release wastewater from the plant into the Pacific Ocean, which has been protested by the Japanese fishing industry, international environmental groups and neighboring countries.

Seoul immediately protested the decision and expressed “grave concern” over the impact on people's safety and the environment.

President Moon Jae-in suggested last month that Korea could raise the Fukushima issue at the International Tribunal for the Law of the Sea. The recent outreach appears to be stepping back from that threat to placate the United States, especially as the Moon administration enters its last year and worries about vaccine cooperation and U.S.-North Korea dialogue.

Kerry said that the United States is “confident that the government of Japan has had full consultation with the IAEA,” indicating that Washington would not intervene in the discharge decision.

Analysts said the Korean government’s demands, including raising the issue at the International Tribunal for the Law of the Sea, weren’t practical.

The Biden administration has been playing the role of a “divorce counselor,” as described in Korean media outlets, between Seoul and Tokyo, as ties between the neighboring East Asian countries deteriorated in recent years over history issues and a trade spat.

Behind-the-scenes mediation efforts by Washington come ahead of a possible first face-to-face meeting between Moon and Japanese Prime Minister Yoshihide Suga at the Group of Seven, or G7, summit in Britain next month.

According to Japanese media outlets, the United States, and Japan are in discussions to arrange a trilateral summit on the sidelines of the G7 meeting to be held in Cornwall from June 11 to 13, which Korea has been invited to attend as a guest. The United States says it is “positive” about holding such a three-way summit, and “Japan has no reason to reject,” a Japanese government source told Kyodo News Sunday.

The Tokyo Shimbun also reported there are discussions ongoing for Moon and Suga to meet separately for bilateral talks.

The last meeting between the leaders of Korea and Japan was in December 2019, when Moon and former Japanese Prime Minister Shinzo Abe met for 45 minutes on the sidelines of a Korea-China-Japan summit. The last trilateral summit was held in September 2017 on the sidelines of a UN General Assembly session.

Park Jie-won, director of Korea's National Intelligence Service, in a visit to Tokyo last Wednesday reportedly relayed a message from Moon to Suga calling for an improvement in bilateral relations.

Park also held trilateral talks with U.S. Director of National Intelligence Avril Haines and Hiroaki Takizawa, Japan's cabinet intelligence director, last Wednesday. On a three-day visit to Seoul, Haines met Moon in the Blue House Friday, and discussed the Korea-U.S. alliance and the Korean Peninsula security situation ahead of the summit in Washington.

Haines was quoted as stressing that the bilateral alliance is not just about security but also universal values such as democracy, peace and human rights, according to the Blue House.

The Biden administration has been pushing for better trilateral coordination with Seoul and Tokyo to better coordinate North Korea policy and amid concerns over China’s rising assertiveness in the region.

Tokyo is cautious about a summit with Seoul, however. Kyodo News reported that if a summit is held, conservatives in Japan may criticize it, especially ahead of a general election in the fall.

Japan already has strengthened relations with the United States since the launch of the Biden administration by cementing its role as a member of the U.S.-led Quad security dialogue, also with India and Australia, and has more wriggle room.

Kyodo reported that thus, there is a possibility for some kind of unofficial brief contact between Moon and Suga at the G7 instead of an official summit.

“As President Biden has a strong will to improve relations between Korea and Japan, it is highly likely that a meeting will take place in any some form,” a diplomatic source in Tokyo said. 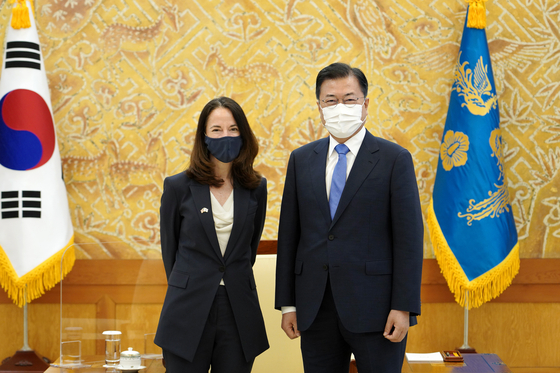 Korean President Moon Jae-in, right, meets with U.S. Director of National Intelligence Avril Haines Friday, one week ahead of his first summit the U.S President Joe Biden in Washington. Moon may hold a trilateral summit with Biden and Japanese Prime Minister Yoshihide Suga on the sidelines of the G7 summit in Britain next month. [BLUE HOUSE]