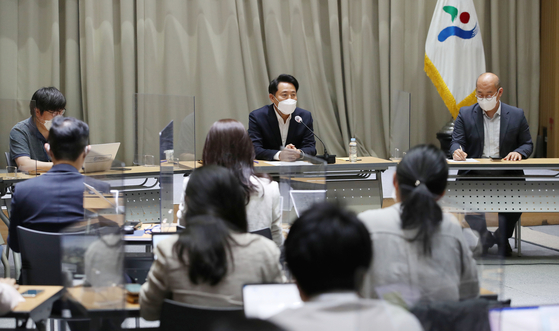 Seoul Mayor Oh Se-hoon speaks with the press at City Hall on Monday to mark his first month in office and to address recent issues of the city and policies to come. [YONHAP]


In a meeting with the press to review his first month in office, Seoul Mayor Oh Se-hoon reiterated some of his election pledges, including plans to provide some 240,000 new housing units in the city to stabilize the real estate market.

“I stand true to my election pledge today, to provide 48,000 new housing units every year for the next five years to provide a total of 240,000 new housing units through 2025, just as I said during my campaign days,” Oh told the press at City Hall on Monday. “My tenure is just around a year and three months. But we are pushing forward with the five-year plan that will be executed annually.”

Seoul’s skyrocketing housing prices have made headlines in recent years. The average pricing of an apartment in Seoul last month was 1.1 billion won ($970,000) according to KB Kookmin Bank’s Liiv app. Compared to the same time last year, the price had risen some 200 million won, according to the app.

To calm the market and discourage real estate speculation, several laws were passed in Korea last year to raise tax burdens for owners of multiple houses.

But another part of the reason for skyrocketing housing prices simply has to do with lack of supply, Mayor Oh said.

“Since 2015, Seoul has not designated anew a single area in the city for redevelopment,” Oh said. “The city needs [to find] the right balance in redevelopment and renovation. Sometimes you just need to redevelop an area to build more houses.”

According to Oh, there are currently 489 areas in the city undergoing redevelopment and renovation.

“We are hoping to be able to relax some regulations on housing as well, but the details of these I will have to get back to you about later,” he said.

Oh during his election campaign spoke often of relaxing some housing regulations such as the height limitation of apartments. Current regulations set the limit at 35 floors for residential buildings in the city. Oh intends to extend the limit to 50 floors to allow for more housing.

Some housing regulation changes require an agreement from the city council, which is largely dominated by the ruling Democratic Party, whose members take up 101 out of 109 seats at the council. Oh is a member of the major opposition People Power Party.

“The city government is already in talks with the council over many issues related to housing policies,” Oh said.

Oh’s tenure may be shorter than usual, but he is not a first-time mayor in Seoul. He held the office from 2006 to 2010, and was re-elected to hold office until 2014. His second term in office was cut short, however, over a policy on free lunches at schools.

Oh at the time was against the idea of providing free lunches for all students across schools, calling it a populist policy, and arguing that citizens’ tax money ought to be spent more selectively. Despite Oh’s protest, the city council in January 2011 passed a law to mandate free lunches across all schools in the city.

Oh suggested the council hold a public referendum over the policy, and vowed to resign if the referendum falls through. The referendum, held in August, did fall through, due to lack of public participation. Oh left the office two days after the referendum.

Back in office this year, one of the policies Oh will put forward is, ironically, free lunches across kindergartens.

“This is something that I had made clear during my election campaign as well — I don’t see why kindergartens and day care centers should be left out when all schools in the city are providing free lunches already,” Oh said in the meeting with the press on Monday.

In a televised discussion last month, Oh said that he had disagreed with the free school lunches policy in 2011 because he “saw it as a policy that could open doors to a plethora of populist policies,” and added that he wasn’t necessarily against the free-lunch idea on its own.

The free-lunch program across kindergartens may start as early as 2023, according to Seoul Metropolitan Office of Education.

Working parents may also see a policy put forward by the city to encourage inclusion of kindergartens or day care centers in office buildings, if there is enough public support for it.

“In my previous term in office, we saw sufficient demand for kindergartens and day care centers to be built within apartment complexes, so we created the policy grounds for that,” Oh said. “We do not yet have the grounds to build the same facilities in office buildings, but this is something that the city government will look into, to see if there is enough demand from the public.”

In combating the Covid-19 pandemic, Oh stressed coordination with the central government and other local governments of the greater Seoul area, which includes Gyeonggi and Incheon.

“The Seoul city government will not independently pursue policies on the pandemic that could confuse the public,” Oh said, in response to a question from the press about whether the city government may consider procuring vaccines on its own.

“For the vaccination and quarantine measures to be issued and adhered to in an orderly manner, it makes sense that the central government takes charge,” Oh said.

Seoul had announced last month its intention to run a pilot program for the regular use of self-test kits across restaurants, bars, schools, call centers and other areas to see if they could be helpful in preventing the spread of the virus. The pilot program was launched Monday.

Regarding the recent announcement by the city government to regulate drinking in public spaces in Seoul, including at parks by the Han River, one of the popular sites to enjoy chimaek, or chicken and beer, Oh said the policy will be implemented in stages.

“The policy was not put forward because of the recent, very unfortunate death of a young man at the park, but it is being put forward in light of the enactment of the National Health Promotion Act on June 30,” Oh said. “The law is about reducing unsound behaviors that can happen in public spaces when under the influence of alcohol. […] The truth is, Korea is one of the least regulated places in the world when it comes to drinking in public spaces. The city government will be listening to the public about what they think are the best ways to regulating drinking in public spaces in Seoul, for the best interest of many.

“So no, I wouldn’t worry about chimaek by the Han River being banned immediately.”