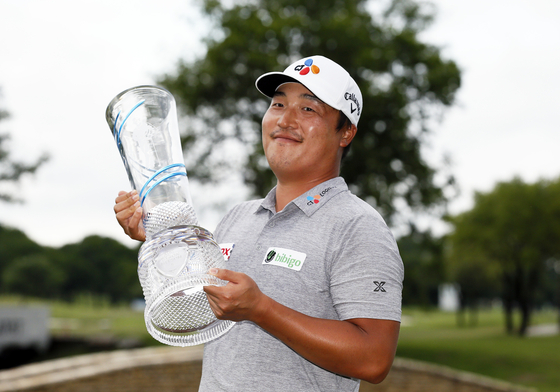 
Lee, who competes as K. H. Lee, overcame tough competition, a crowded leaderboard, heavy rain and even lightning on Sunday to lock in a final round score at 6-under, 66, to win the tournament.

After two bogey-free rounds on Friday and Saturday, Lee entered the final round on Sunday in second place, one shot behind Sam Burns of the United States at 19-under, 197.

A strong front nine put the Korean into the lead, with five birdies and one bogey putting him well out in front. The only crack in Lee's lead appeared on the 16th, when the forces of nature colluded to interrupt his short game.

As Lee lined up a 15-foot putt on the 16th,  a bolt of lightning pulled his eye off the ball. Moment later, the horn sounded for a rain delay and Lee had to wait a couple of hours before attempting the ill-fated putt. In the end it was a bogey, potentially opening the door for Burns.

“I was not that nervous before the round, but I was very nervous when we resumed to play,” Lee said after the tournament. “I was shaking inside last three holes.”

Nervous or not, Lee pulled through with birdies on the 17th and 18th to lock in his victory, finishing the tournament at 25-under, 263, with a solid three stroke lead over Burns.

“When I made bogey at 16, it felt like I had lost a little momentum, so I wanted to try and be more aggressive on Nos. 17 and 18,” Lee said. “Hit a good shot on 17, which was important to good some momentum back and have a good finish.”

Lee is the eighth Korean ever to win on the PGA Tour and the second this season, after Kim Si-woo won The American Express in February. After Sunday's victory, Lee is the third Korean to win the AT&T Byron Nelson, following immediately after Kang Sung-hoon, who won in 2019, and Bag Sang-moon, who won in 2013.

After his victory, Lee was joined by his wife, as well as previous winner Kang and Korean golfing legend K. J. Choi.

“He told me how proud he was of me,” Lee said. “I’m very thankful for K.J. He means a lot to me. It is always good to have Korean players around me and to play the TOUR together. It definitely helps my game.”

Choi wasn't the only person to say he was proud of Lee. Despite having just missed out on the victory, Burns was quick to praise the Korean on his maiden win.

“(Lee) played awesome. I was really proud of him,” Burns said. “When it was tough he hung in there and he got off to a great start. It was kind of gettable in the beginning. Got off to a really fast start, and then kind of midway through got tough for everybody, and he kept hitting one shot after the next and never gave anybody a chance.

“It was fun to watch. I was proud of the way he played, and it was tough to beat him today.”

Lee has picked up two wins on the KPGA and two on the Japanese Tour, but had not picked up a tour in the United States since moving there and joining the Web.com Tour in 2016. Sunday's win ends that five years of silence.

Lee has now earned a spot at the PGA Championship at Kiawah Island in South Carolina later this week.