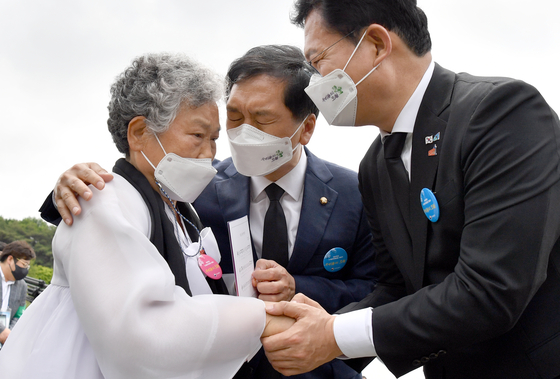 From right, ruling Democratic Party Chairman Song Young-gil and opposition People Power Party's acting Chairman Kim Gi-hyeon comfort a relative of a victim of the May 18 Gwangju Democratization Movement of 1980 at the May 18th National Cemetery in Gwangju on Tuesday. [YONHAP]

The commemoration ceremony for the 1980 massacre of democracy protesters in Gwangju became a pilgrimage site for presidential contenders this year from across the political spectrum.

“We are truly sorry for the bereaved families,” Kim Gi-hyeon, acting chairman of the opposition People Power Party (PPP), told the press after attending the annual ceremony at the May 18th National Cemetery in Gwangju.

“The victims are the protagonists of Korea’s democratization,” Kim added. “We ought to honor their legacy through cooperation and coexistence in our society today.”

Gwangju has been a liberal stronghold in Korea. Conservatives are hoping to change that at least to some extent in the presidential election next year.

“The spirit of the May 18 movement was absent in the four years of the Moon Jae-in administration, which violated the principle of separation of powers,” Yoo told the press after visiting the May 18th National Cemetery in Gwangju on Monday. “I demand the president and the Democratic Party [DP] apologize for their violation of democratic and constitutional principles of the nation.”

Opposition members have criticized the DP-dominated National Assembly for railroading through bills without input from the opposition. DP members hold 174 seats in the 300-seat Assembly.

The May 18 Gwangju Democratization Movement is the official term for the 10-day civilian uprising against the Chun Doo Hwan leadership from May 18, 1980, when students from Chonnam National University staged a protest calling for democracy. The following day, the Chun leadership dispatched special forces to Gwangju, who opened fire on protesters and deployed brutal tactics such as beatings to crush the demonstration.

According to the May 18 Memorial Foundation, 154 people were killed during the 10-day uprising or after from injuries sustained. Seventy people are recognized as missing, probably buried in anonymous graves.

Gwangju's reputation as a liberal stronghold in Korea explains the pattern of attendance of presidents at the annual commemoration.

Former conservative presidents Lee Myung-bak and Park Geun-hye attended the ceremony only once each, both in their first year in office. For other years, they sent cabinet members to read an address. In contrast, former liberal President Roh Moo-hyun, for whom Moon was chief of staff, attended the event every year during his five-year term.

Moon, who attended the event in 2017 and 2019, said he would be attending the event every other year. This year, Prime Minister Kim Boo-kyum attended in his place. Though the presidential office didn’t provide a reason, his absence may have to do with the summit with U.S. President Joe Biden on Friday. Moon is flying to Washington on Wednesday.

“We see yesterday’s Gwangju in today’s Myanmar,” Moon said in a statement he issued on Tuesday. “I sincerely wish that the Gwangju […] becomes a source of hope for Myanmar. In heartfelt commemoration of the souls who sacrificed themselves for democracy in May [1980], we pay respects and express sympathy to the wounded and bereaved families who have endured hard times.”