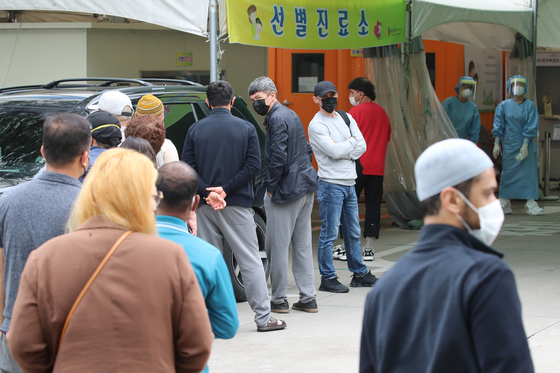 Foreign workers line up to get tested for Covid-19 at a health center in Seo District, Daegu on Tuesday. Since Ramadan, a number of Covid-19 cases broke out at a mosque and a prayer room in Daegu, and the city closed some Islamic facilities while conducting Covid-19 testing on Muslims. [NEWS1]


As the U.S. plans to send Covid-19 vaccines overseas, a high-ranking source in the Blue House told the JoongAng Ilbo on Tuesday that Korea is a priority destination.

“The Biden administration is fully aware of Korea’s shortage of vaccine supplies in the second quarter, and consultations between the two countries are under way,” a high-ranking Moon Jae-in administration official told the JoongAng Ilbo.

“Korea is a type of ‘priority foreign country’ in the U.S. plan to provide vaccines overseas, and we are expecting a positive result from the summit,” the official added.

U.S. President Biden promised last month to share 60 million doses of the AstraZeneca vaccine with other countries. On Monday, Biden announced the shipment of an additional 20 million doses of domestically approved Covid-19 vaccines abroad by the end of June, including Pfizer, Moderna and Johnson & Johnson's.

The Korean government hopes for concrete results on vaccine cooperation from the Moon-Biden summit Friday.

The government previously made requests to the U.S. for a type of vaccine swap, or the U.S. supplying Korea with vaccines that Korea would return at a later date, to solve vaccine shortages. Korea's Ministry of Foreign Affairs said last month that the two governments were engaged in serious talks on such a scheme.

Some new domestic vaccine production through a technology transfer is also expected to be discussed at the summit. Speculation is high that Moderna will manufacture its products in Korea, with reports saying the company reportedly started a process to open a subsidiary here. Currently, SK Bioscience produces AstraZeneca vaccines in Korea, and it will also begin manufacturing Novavax vaccines as early as June.

Korea has been struggling with shortages of vaccine shots through May and June, as deliveries of Moderna and Novavax vaccines originally scheduled to arrive in the second quarter were delayed.

The total amount of vaccines Korea has procured is 192 million doses, or for 99 million people – which is enough to inoculate its entire population of 52 million almost twice over. Most of those, however, are expected to be supplied after the second quarter of this year.

On April 20, acting Prime Minister Hong Nam-ki admitted that there had been a setback in the vaccine schedule, saying, "Most of the procured amount of Moderna's vaccine  cannot be supplied in the first half of the year and is expected to come in the second half."

The Korean government expects the U.S. to share at least 100 million vaccine doses with other countries within the second quarter, from 80 million doses announced so far. If about 10 million of them can be procured by Korea, it would raise the possibility of reaching herd immunity by November.

Korea reported 528 new Covid-19 cases, including 506 local infections, raising the total caseload to 132,818, the Korea Disease Control and Prevention Agency (KDCA) said. There was one additional death, raising the death toll to 1,904.

A total of 41 people tested positive as of Monday midnight in connection with a noraebang (singing room) in Gangdong District, eastern Seoul.

A total of 18 people tied to a hostess bar in Wonju, Gangwon, were confirmed, and the city announced it will raise its social distancing level to Level 2 from Wednesday.

In Daegu, a cluster of infections tied to Islamic facilities during the fasting period of Ramadan is continuing, raising the total number of infected people to 30. The Daegu Metropolitan Government has closed the mosque where the Covid-19 cases broke out and conducted testing on around 210 believers, most of whom were foreigners.