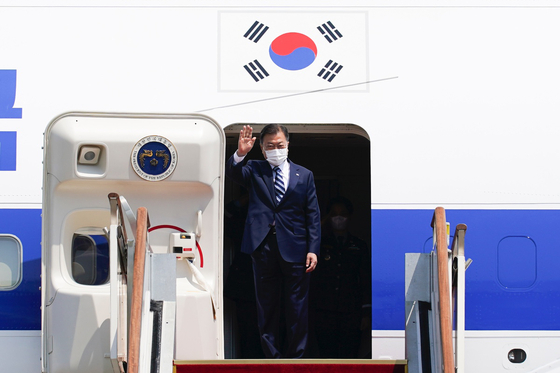 President Moon Jae-in waves his hand from the presidential jet at the Seoul Air Base in Seongnam, Gyeonggi, Wednesday, before departing Wednesday afternoon for a summit with U.S. President Joe Biden in Washington Friday. This marks Moon's first overseas trip in over a year since the Covid-19 pandemic. [NEWS1]


President Moon Jae-in left Korea Wednesday for a four-day trip to the United States and his first summit with U.S. President Joe Biden, during which they are expected to discuss Covid-19 vaccine cooperation.

The two leaders could make a joint statement Friday on cooperating for the production and supply of vaccines in the Indo-Pacific region as a part of a broader framework to jointly respond to the coronavirus pandemic.

Moon is seeking more vaccine supplies from the United States, although analysts say that specific details may not be included in a joint statement because of contractual issues with individual drug companies.

“The United States unilaterally providing vaccines and Korea receiving them is not actually cooperation,” a diplomatic source said Wednesday. “The outcome of the discussions between the leaders is highly likely to be a larger framework, drawn from the premise that the two sides will cooperate to cope with the Covid-19 response in a wider scope with multilateral aspects.”

Korea and the United States could play complementary roles as vaccine leaders in the Indo-Pacific region and at the global level, and based on this framework, substantial vaccine support may be provided to Korea

Moon departed from the Seoul Air Base in Seongnam, Gyeonggi, around 2 p.m. Wednesday, a holiday marking Buddha’s birthday, on his presidential jet.

First lady Kim Jung-sook did not accompany Moon. The United States reportedly asked him to limit his delegation because of Covid-19. The leadership of the ruling Democratic Party including its chief Song Young-gil, close aides and acting U.S. Ambassador Rob Rapson saw off Moon.

Moon said that he had "high expectations" for his first overseas trip since a visit to China in December 2019, prior to the pandemic, noting he plans to “bring good results” home from his U.S. visit.

This will be Moon's 10th Korea-U.S. summit and fourth visit to the United States since taking office.

The summit will be held in the White House on Friday afternoon and be followed by a joint press conference. Moon and Biden are expected to discuss the Korean Peninsula and alliance issues, along with broader regional and global issues. It will also be an opportunity to strengthen the bilateral economic partnership.

Moon will begin his official schedule Thursday morning with a visit to Arlington National Cemetery and pay tribute at the Tomb of the Unknown Soldier.

He will attend a groundbreaking ceremony for a Wall of Remembrance at the Korean War Veterans Memorial. He is scheduled to meet with House Speaker Nancy Pelosi and Cardinal Wilton Gregory, the archbishop of Washington.

He may also stop in Atlanta to visit a factory of SK Innovation.

Several CEOs of Korean companies, including SK and LG, are accompanying Moon. They are likely to announce plans for large-scale investments.

Korea has proposed a vaccine swap arrangement with the United States amid a global shortage of supplies. Seoul has also been working on speeding up shipment of vaccines made by U.S. drug companies and a deal for technology transfer for local production.

A former diplomat said, “In their first phone call, the two leaders stipulated the nature of the Korea-U.S. alliance in Biden's era, saying that as responsible allies that share values, they should develop a comprehensive strategic alliance beyond the Korean Peninsula and the Indo-Pacific. Vaccine cooperation will also be approached based on these principles.”

Kurt Campbell, the White House Asia czar, told Yonhap News Tuesday that Korea and the United States, as major vaccine manufacturers, “should work together toward bolstering the global supply of Covid-19 vaccines."

He noted that the allies “are world-leading nations in technology and we plan to discuss new ways for our countries to work together on these important issues,” urging "tangible partnerships" on semiconductor supply chains.

In the Yonhap interview, the White House policy coordinator for Indo-Pacific also confirmed for the first time that Biden will built on the Singapore agreement pledging complete denuclearization of the peninsula signed by former U.S. President Donald Trump and North Korean leader Kim Jong-un in June 2018 for the first time.

“Our efforts will build on Singapore and other agreements made by previous administrations,” said Campbell, noting that the Biden administration’s recently completed review of its North Korea policy “took a careful look at everything that has been tried before.”

There is also interest to see if there will be any mention of an expanded Quadrilateral Security Dialogue, or Quad, involving the United States, Japan, India and Australia.

Campbell told Yonhap that the United States currently has “no plans to expand the Quad” but added that “shared values of support for a free, prosperous Indo-Pacific are certainly embraced by many other regional partners and we believe there will be ways to continue to expand regional cooperation.” He said that this includes cooperation with South Korea among other regional partners.