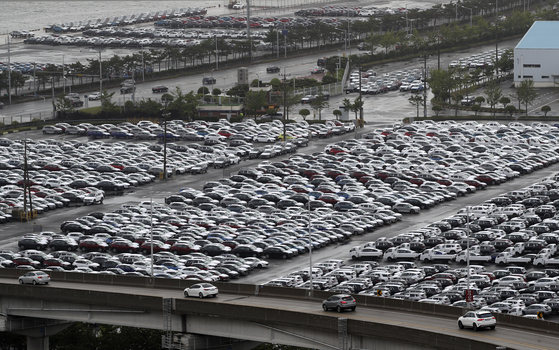 Hyundai Motor vehicles for export waits at a dock in Ulsan on May 1. [NEWS1]


A gradual but steady increase in power consumption is the latest indication of economic recovery, along with healthy indicators in manufacturing, making President Moon Jae-in's goal of  4-percent growth for 2021 more possible.

According to a report by the Korea Electric Power Corp. (Kepco), power consumption in March increased by 0.5 percent compared to a year earlier, the fifth consecutive month of positive growth.

After the Covid-19 outbreak, power consumption fell for 10 months before turning around last November with a 0.1 percent increase.

The increase in power consumption in recent months is partly caused by an uptick in industrial activities led by strong exports.

In March, electricity sales to the semiconductor industry rose 9.5 percent  compared to a year earlier. Sales to petrochemical manufacturers saw a 6 percent increase and to the automotive industry 4.7 percent.

A report by the Korea Industrial Complex Corporation, an agency under the Ministry of Trade in charge of Korean industrial complexes,  also portrayed a manufacturing industry roaring back.

According to the report, the average operation rate at industrial complexes was 82.1 percent in March, the highest rate since March 2017.

When Covid-19 started affecting Korea and then the rest of the world, operation rates fell. Last May, the operation rate for plants in Korean industrial complexes fell to as low as 70.4 percent.

By industry, the operation rate at companies making transportation equipment averaged 90.8 percent in March, while the comparable number for steel producers was 82 percent, for petrochemical producers 86.7 percent, and textile and clothing producers 72.4 percent.

In another good sign, according to the Korea Iron and Steel Association, crude steel production amounted to 6.06 million tons in March, a 4.8 percent increase compared to  a year earlier.

It was the largest amount of crude steel produced since May 2019's 6.27 million tons. Crude steel production fell every month between March and November 2020 except for September.

It has been increasing every month since December's 0.7 percent increase on-year.

Even the employment situation seems to be improving.

The lawmaker's study was based on job data from Statistics Korea.

The lawmaker said that for the first time in 14 months, jobs lost to layoffs and businesses being forced to close have declined.

However, some analysts say it’s too early to pop the champagne as the recent positive data could be the result of a base effect -- businesses coming back from a low base during the pandemic. They cautioned that many industries are still suffering badly from the global pandemic, especially many small companies.

“From various economic indices, one could think industries are not only moving away from the shockwave of Covid-19 but recovering,” said Choo Kwang-ho, head of research for the Korea Economic Research Institute.

“However, we still have to closely monitor another two to three months as uncertainties such as the automotive industry being impacted by the supply shortage of semiconductors and worries of a fourth Covid-19 wave remain.”