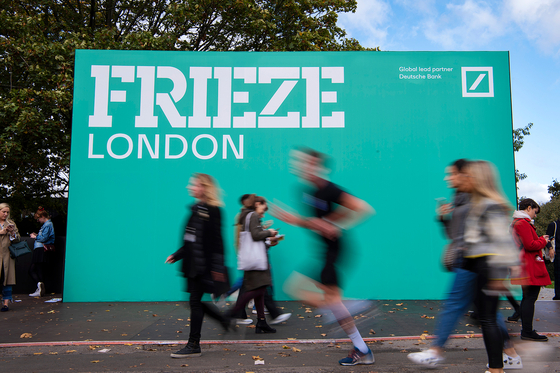 
Art enthusiasts around the world, and especially those in Korea, had a more than pleasant surprise when Frieze, one of the world’s representative art fair franchises, announced on Tuesday that it will launch a new art fair in Seoul next year.

Frieze said the new fair will be launched in partnership with the Galleries Association of Korea. It will be Frieze’s first venture in Asia and its fifth in total, joining Frieze Los Angeles. Frieze New York, Frieze London and Frieze Masters.

Frieze Seoul will run alongside KIAF Art Seoul, the oldest art fair in Korea that is also organized by the Galleries Association of Korea. The two fairs are scheduled to be hosted from Sept. 2 to 5 next year at Coex in Gangnam District, southern Seoul.

“Seoul is a natural home for Frieze with its extraordinary artists, galleries, museums and collections,” Victoria Siddall, Board Director of Frieze, commented in an official statement. “I am thrilled that it will be the location for our new fair, Frieze Seoul. We are honored to be working alongside the Galleries Association of Korea in a spirit of collaboration that is right for our times. Together, we will create an unmissable week in Seoul that brings together galleries from all over the world and celebrates the city’s vibrant art scene.”

Hwang Dal-seung, the Chairman of the Galleries Association of Korea, expressed excitement over the huge step forward the Korean art scene was taking, especially during a period when national interest in the Korean art market is peaking higher than ever before.

“In a period of high public interest in the Korean art market, the collaboration between Korea’s largest art fair and Frieze will confirm Seoul as a hub of the global art market, and Korea as a major destination for the art market in Asia,” he remarked. 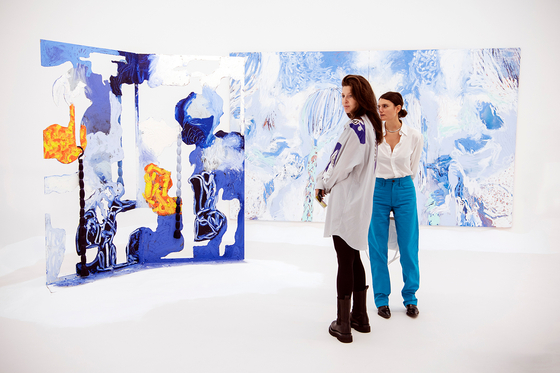 
With the launching of the two fairs, art galleries across the globe are expected to gather in Coex. Frieze, as one of the leading global art fairs alongside Art Basel and FIAC, annually invites some 170 renowned galleries such as Gagosian, Hauser & Wirth, Lehmann Maupin and Thaddaeus Ropac.

The launch of Frieze Seoul has also raised anticipation that Korea may be cementing itself as a global art hub.

“In a way, Korea was the best suited candidate among Frieze’s search to plant their flag down in Asia,” So Jin-su, a professor of economics at Kangnam University and art field expert, remarked. So referred to the phenomenon of major art players moving away from Hong Kong, the prior hub of the art market in Asia, due to its political unstableness.

“So many people wondered, would they settle down in Shanghai, Busan, or Seoul? Shanghai, however, already has a market big enough to run autonomously. Plus, it already has two major art fairs — West Bund and Art021. Beijing, on the other hand, is a closed society, and there are no existing international art fairs anyway.

“Nonetheless, Shanghai was a very attractive candidate because there are a lot of museums, private museums at that, which equals more purchasing power,” he analyzed. “Korea lacks purchasing power though, which is why, out of three countries [China, Japan, Korea], Korea has had the keenest interest in contemporary art but has failed to partner up [with art players] until now.”

But the tables appear to be turning for Korea. Just last month 23,000 artworks and artifacts from the massive collection of late Samsung Group Chairman Lee Kun-hee (1942-2020) were donated to local museums nationwide.

More proof of the local art market's growing vibrancy is the record high sales — totaling some 35 billion won ($31 million)  — the Art Busan fair, which was hosted from May 14 to 16. Art Busan said the price range of the art sold varied widely. The most expensive piece sold for 2.5 billion won while works by rookie artists were priced between 300,000 to 500,000 won. 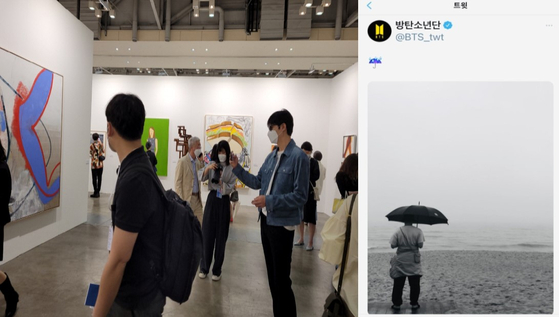 Actor Lee Min-ho, left, taking a picture of contemporary artist Daniel Richter’s “Sick Music” (2018) at the booth of Thaddeus Ropac gallery at the VIP opening ceremony of Art Busan on May 13. RM, right, uploaded a picture of himself in Busan during this year's Art Busan fair, on the official BTS twitter on May 16. [ART BUSAN, TWITTER]


Art experts say that as the Covid-19 pandemic persists and people are restricted from traveling freely overseas, more are turning their attention to the art market. Moreover, the age range of art collectors has expanded from those in their 50s and 60s to those in their 20s and 30s, who have been actively entering the market and buying pieces to express their unique preferences. In a report published by Art Basel and sponsored by UBS titled “The Art Market 2021,” more than half of those who’ve spent over $1 million purchasing artwork were those in their 20s and 30s. About 52 percent of the collectors were born between 1981 and 1996, and 4 percent of people were even younger than that.

The influx of hallyu (Korean wave) and K-pop stars at art events is also said to have influenced the escalating popularity in the art industry. For instance, RM, the leader of boy band BTS, is famous for visiting art exhibitions to collect various pieces, from contemporary maestros to the moon jar made by ceramic artist Kwon Dae-sup, and anonymous artists as well. The pieces he buys earn the artists global  interest. According to Art Busan, RM is to have visited the fair on the morning of May 15.

Actors Lee Min-ho, Lee Dong-hwi, Ahn So-hee, Ha Hee-ra, rapper Simon Dominic and singer Lim Seul-ong also visited Busan. Rapper Simon Dominic, who is recently active on variety shows such as MBC’s “Hangout With Yoo” and “I Live Alone,” showcased his interest in contemporary art in the latter show when a piece by artist Ok Seung-cheol was shown hanging on the wall of his home.

Prof. So says that Korea is taking the same steps that Hong Kong took years ago. Already renowned art galleries such as Pace and Lehmann Maupin committed to new spaces in Seoul in 2017, and the former recently moved to a bigger space in Le Beige Building in Hannam-dong, central Seoul. The gallery is to reveal its expanded space to the public in the inaugural exhibition of African American artist Sam Gilliam from May 25, which also marks the first time for his latest works to be exhibited in Asia.

“Christie’s first entered Hong Kong 30 years ago and put it on the map as the hub of art auctions and the art market,” he said. “They were very fast, and their instinct was successful. The process is first art fairs, and when they settle down, galleries follow. We’re also seeing some fun as Western galleries enter the market. But they cannot host main exhibitions, because we still lack purchasing power.”