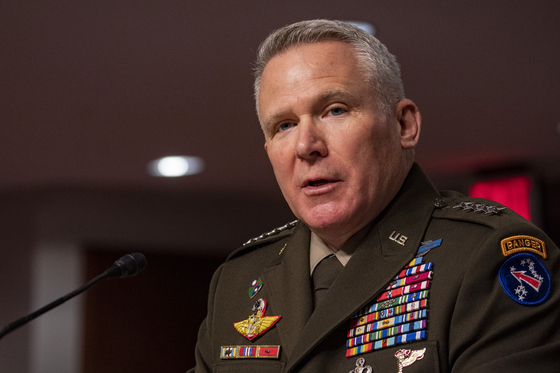 Gen. Paul LaCamera, the nominee for commander of the U.S. Forces Korea, testifies at the Senate Armed Services Hearing in Washington Tuesday. [UPI/YONHAP]


Gen. Paul LaCamera, nominated to command the U.S. Forces Korea (USFK), said in his Senate confirmation hearing Tuesday that combined military drills by Seoul and Washington could be a "potential bargaining chip" in denuclearization negotiations with Pyongyang.

LaCamera stressed the importance of resuming joint field exercises with South Korea and told the Senate Armed Services Committee, "They are extremely important to build readiness. But they are also extremely important to allow that our soldiers, sailors, airmen, Marines, Coast Guardsmen get an opportunity to work with our ROK [Republic of Korea] allies and see just how good they are."

It is also an opportunity for troops to "build trust" in each other, he added.

Since North Korea-U.S. diplomacy kicked into high gear in 2018, regular large-scale exercises between Seoul and Washington were postponed or scaled down. Pyongyang traditionally protests Seoul-Washington military drills, viewing them as war rehearsals. Since last year, large-scale joint exercises have been held as computer-simulated tabletop drills or scaled down because of the Covid-19 pandemic.

LaCamera noted that live training is "a lot better than the virtual."

He continued, "But I recognize that in negotiations it is a potential bargaining chip going forward and my job will be to identify that risk and then figure out a way to reduce it."

LaCamera, a 57-year-old four-star general, previously served as commander of U.S. Army troops in the Pacific. If confirmed, he will replace Gen. Robert Abrams as commander of the USFK, United Nations Command and the Korea-U.S. Combined Forces Command.

In a speech at his farewell ceremony last Thursday, Abrams, who took the post as USFK chief in November 2018, relayed the saying, "The more you sweat in peace, the less you bleed in war," a possible reminder of the importance of live training exercises.

On dealing with North Korea and its leader Kim Jong-un, LaCamera said in the Senate hearing, "I do believe he's a rational actor. I do think that we need to make sure that we're looking at all levers of the diplomatic, information, military and economic power, that we have to continue to deter him."

Sen. Tim Kaine, a Democrat from Virginia, pointed out that South Korea and the United States should explore opportunities to work together to deescalate tensions on the Korean Peninsula such as a peace treaty ending the 1950-53 Korean War, which ended in ceasefire. Kaine pointed out that an end-of-war declaration could bring North Korea and the United States to negotiate not as adversaries but as "sovereign nations solving problems."

Kaine said that he hopes that South Korean President Moon Jae-in and U.S. President Joe Biden might "contemplate whether a change in diplomatic approach such as that could break a logjam that has been persistent for nearly seven decades."

LaCamera, in turn, confirmed that from a military standpoint, the United States seeks no hostilities with North Korea, nor does it have desire to annex or take North Korean property.

He also addressed the leverage that China has on U.S. partners and allies in the region.

When asked how he would advise the South Korean defense apparatus to respond to Chinese expansion in the Indo-Pacific region, as well as possible economic encroachments, he replied, "If confirmed, the best military advice I would give them is to make sure that they understand the risk that it provides to the security of their own country… as the Chinese attempt to provide influence and or reduce the influence that the United States has."

He continued, "And I think it's our job to demonstrate that our way of life, and our alliance, remains ironclad and that we remain the cornerstone and the example, quite frankly, for other alliances."

On the military side, LaCamera said, "My focus will be to work with the ROK military to ensure that we can defend them against any adversary."

LaCamera said that he believes the transfer of wartime control (Opcon) to Korea should "remain as a conditions-based approach," as agreed on by both countries. He also cautioned against "any effort to apply a time-based approach to this important endeavor."

The Moon administration initially hoped for Korea to regain Opcon from the United States by the end of the president's five-year term in May 2022, but that goal has been clouded because of delays in an assessment process due to the Covid-19 pandemic.

LaCamera confirmed to senators that after the transfer of Opcon, in case of contingency with North Korea, the USFK would be put under South Korean command. He said that even in the case of possible simultaneous conflicts with North Korea and China, this system would provide the "flexibility" needed for the USFK to reposition forces.

He stressed, "This remains a critical period in Northeast Asia and in Korea as we face persistent challenges with the development of nuclear and advanced missile technical systems, cyber capabilities, asymmetric and military technologies."

LaCamera said in a written response to policy questions that he would "advocate" for a greater role of the USFK in regional contingencies facing the U.S. Indo-Pacific Command, "supporting U.S. interests and objectives in the region."

He also wrote, "Given the global role of the U.S. military and, increasingly, the international reach of the South Korean military, opportunities are emerging for Alliance cooperation beyond the Korean Peninsula."

On Kim Jong-un's claims at the beginning of the year that North Korea expanded its nuclear force, including the development of miniaturized nuclear warheads, he said that after an assessment, he would "review potential requirements for any necessary capabilities and force structure changes on the peninsula."

He was also asked by several senators how to improve South Korean and Japanese relations, and the general said he looks to multilateral training opportunities going forward and taking advantage of the relationships he has built up over the years operating in the Pacific.

A graduate of the U.S. Military Academy in West Point, LaCamera was made commander of the U.S. Army Pacific in November 2019. If confirmed, he could take up his new post as early as next month.

U.S. returns land in Yongsan and other bases to Korea