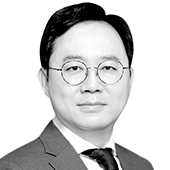 Hong Sok-chul
The author is a professor of economics at Seoul National University.


South Korea’s economy grew 1.6 percent in the first quarter compared the previous quarter, according to the Bank of Korea (BOK). The government has turned exultant about economic recovery as the gross domestic product (GDP) is growing at a pace stronger than the fourth quarter of 2019, which was before the arrival of Covid-19.

But the headline growth rate masks deepening inequalities. GDP is comprised of private consumption, corporate investment, government spending and net exports. Capital investment and net exports recovered to pre-Covid-19 levels from the latter half of last year. Government spending also surged to fight the pandemic. But the growth of private consumption, which makes up half of GDP, hovered 5.5 percent below the level of the fourth quarter of 2019.

The services sector has been hard hit due to depressed consumption. Hospitality, eateries, wholesale and retail, transportation, culture and other services shrank 30 trillion won ($26 billion) last year compared to the previous year. When converted into growth compared to 2019, the hospitality and eateries segment lost 19 percent, wholesale and retail 2.6 percent, transportation 16.5 percent, culture and other services 16.8 percent. Given the surge in online sales due to virus mitigation rules, the economic slump had a disproportionate effect on the self-employed and small merchants engaged in personal contact businesses.

The government projects this year’s growth to approach 4 percent. That’s spectacular compared to the pandemic year’s 1 percent contraction, the worst rate in 22 years. But what is more imperative than growth is to tend to inequalities across classes and businesses. Reviving restaurants, hospitality, transportation and entertainment and culture-related sectors is crucial. That can only be possible when lives are normalized. Speedier vaccinations to achieve herd immunity as fast as possible to normalize everyday lives is the only solution.

The vaccination rate of more than a single jab is at 7.3 percent, below the global average of 8.8 percent. The government is doing all it can to secure vaccines, but social compliance is as important as supplies. More people have become hesitant about receiving shots due to concerns about side effects. Despite the government’s publicity campaign on the safety of vaccines and the necessity of taking the shots, public acceptability is still low. Vaccinations are needed not just for self-protection but to lessen the danger of spreading the virus to others. To raise the vaccination rate to a necessary level, a free vaccine program is necessary. But free shots are not enough to prevail over the anxieties about side effects. A more effective measure is needed before it is too late.

There must be more motivation to vaccinate. Israel, which achieved an inoculation rate of 60 percent, requires a green pass — a certificate of full vaccination — for people to use mass-purpose facilities. That is meant to encourage young people to get shots. Vaccinated people want to return to normal activities without masks. Some countries offer cash incentives, but that should be the last resort as it can stoke class conflict.

Inoculating those who are more inclined to receive the shots first is also an idea. More than half the population in the U.S. and Israel have received at least a single shot to achieve close to the herd immunity effect. The vaccination rate became high in the countries as people considered their safety and lives were at stake due to the seriousness of the Covid-19 situation. But Korea’s virus spread has been less volatile, causing many to defer vaccinations before more reliable vaccines arrive. But there are people who wish to get the shots as soon as possible for safe business activities and oversea trips. The early-stage vaccine program mostly centered on older people or those in risky professions like health workers. The next phase should focus on ways to solve economic problems.

The government also must do its utmost to secure safe vaccines. If safety issues or concerns are removed, people will volunteer to get vaccines. The cost would be greater if the government decides to import safer vaccines on top of the existing stock. But that would be less than the cost of delayed herd immunity and economic losses from it.