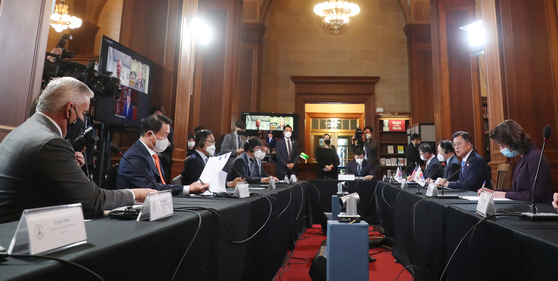 
SEOUL, WASHINGTON - Samsung Electronics will invest $17 billion in a new chip factory in the United States, according to a statement released by the Korean government during a business roundtable in Washington Friday.

The roundtable was held on the same day as a meeting between President Moon Jae-in and President Joe Biden.

The Samsung Electronics factory will be focused on producing 5-nanometer semiconductors using extreme ultraviolet (EUV) lithography, according to press reports.

It will be the chipmaker's first overseas plant to use EUV lithography, which is necessary to manufacture high-performing chips.

Samsung Electronics has been in discussions to make the investment near the chipmaker's existing facility in Austin, Texas, though the roundtable announcement did not mention that location specifically.

In a proposal submitted to the Texas state government, the chipmaker said that the plant will "produce advanced logic devices for Samsung's foundry business." The aim is to break ground this quarter for completion in the fourth quarter of 2023, according to the proposal.

Korean companies have committed to making a total of $40 billion of investments into plants and other facilities in the United States, a sum which includes the $17 billion from Samsung Electronics.

LG Energy Solution and SK Innovation will spend a combined $14 billion to ramp up their EV battery production capacity in the United States.

SK hynix will spend around $1 billion to establish a research and development center focused on AI and advanced NAND flash memory in Silicon Valley, according to the Korean government.

Hyundai Motor and Kia have already confirmed a total of $7.4 billion of investment in the United States through 2025 to start production of electric vehicles (EVs).

At the roundtable, participants from the two countries discussed ways to cooperate in the supply of chips and EV batteries and in biopharmaceuticals.

According to media reports, Samsung Biologics is in talks with Moderna to manufacture the U.S. drug maker's vaccine in Korea, while SK Bioscience is seeking to extend its licensing deal with Novavax for the NVX-CoV2373 coronavirus vaccine through next year.