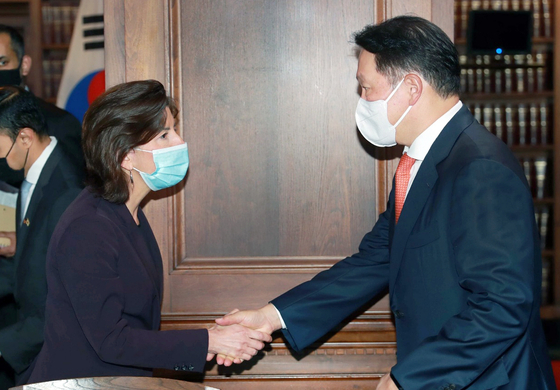 SK Group Chairman and KCCI Chairman Chey Tae-won is greeted by U.S. Commerce Secretary Gina Raimondo during a meeting in Washington on Friday. [KOREA CHAMBER OF COMMERCE AND INDUSTRY]

SK Group Chairman Chey Tae-won told the Business Roundtable (BRT) that cooperation should go beyond business and include social issues.

“Establishing capitalism and ESG management among interested parties is important in solving problems that we face, including growing uncertainties due to international affairs that are rapidly changing, climate change, the income gap and shrinking populations,” Chey said during the BRT meeting on Friday.

“There is much on which the KCCI and BRT can work together,” Chey said.

The SK Group Chairman stressed not only expanding investments in three major industries – semiconductors, batteries and biopharmaceuticals – in the U.S. but also contributing to creating community-centered social value, including quality jobs and environmental protection efforts.

Chey was the only head of a Korean chaebol to visit the U.S. with President Moon Jae-in. He is the head of the Korea Chamber of Commerce and Industry (KCCI), a position he assumed in March.

BRT, which was founded in 1972, includes among its members the largest 200 U.S. companies, including Apple, Amazon, Walmart, General Motors and Johnson & Johnson.

On Thursday, Chey also held a meeting with the Information Technology Industry Council (ITI), including ITI President Jason Oxman and Executive Vice President Robert Strayer, in which they discussed the strategies of the Joe Biden administration.

“Korean companies have been solid economic partners for the U.S. through investment, stable semiconductor supply, the hydrogen economy, the production of EV batteries and quality jobs,” Chey said during the meeting. “A wide variety of cooperation channels need to be established so that the competitiveness of both countries can grow further in the information and telecommunications area.”
BY KANG KI-HUN [lee.hojeong@joongang.co.kr]