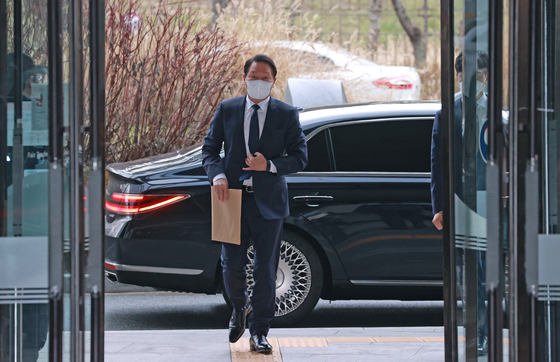 SK Group Chairman Chey Tae-won arrived at the Fair Trade Commission (FTC) headquarters in Sejong on Wednesday to defend himself against accusations that he received a sweetheart deal when he bought almost a third of LG Siltron in 2017.

He didn't answer questions from reporters when he entered the building.

Civic groups are crying foul, claiming SK Holdings, now known as SK Inc. sold the shares at a discount to Chey, who is chairman and co-CEO of SK Inc. and owns 18.4 percent of the company.

SK Inc. has argued that Chey participated in the acquisition of the remaining shares to block possible foreign ownership, especially by interests from China, of a company that makes crucial components for semiconductors.

The FTC was to hold a meeting headed by the commissioner on Dec. 8 to discuss the deal, but it was delayed one week.

A personal meeting between a chaebol head and the regulators is highly unusual. Normally attorneys will present arguments defending their clients facing charges from the FTC.

The FTC plans to finalize its decision about the transaction next week.