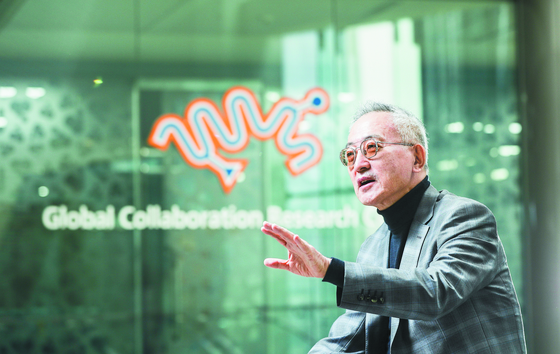 Cha hasn’t appeared in public for almost five years since the scandal involving former president Park Geun-hye and her confidante Choi Soon-sil in 2016. At the time, CHA Medical & Bio Group was hit with allegations it offered unauthorized stem cell treatment for government officials including Park and her friend Choi.

Cha stepped down from the position of chairman and has been concentrating on expanding the company's overseas network and developing research for the group under his new title, global research and innovation leader.

CHA Medical & Bio Group plays a significant role in the Korean healthcare industry, with many hospital branches across the country. It also runs CHA Bio Complex, a bio research center, and CHA Biotech, a company that develops new biomedicine.

CHA Medical & Bio Group operates a few medical centers in foreign countries, including the CHA-Hollywood Presbyterian Medical Center in Los Angeles. It also focuses on fostering young talent specializing in the healthcare industry at its own CHA University in Pocheon, Gyeonggi.

Cha recently sat down with the JoongAng Ilbo at CHA Bio Complex in Pangyo, Gyeonggi to talk about the future of Korea in the bio industry.


Q. You ended up at the center of attention five years ago. How did things turn out?

A. I only saw Choi Soon-sil on television, and never even met her. Choi was just one of the 10,000 daily customers at our hospital.

The investigation revealed the allegations surrounding CHA Medical & Bio Group including that we offered unauthorized stem cell treatments to the former president or received special treatment from the former administration to be untrue.

Allegations were reported widely, but the news that we had been proven not guilty did not get much attention.

I entrusted the president of CHA University Medical Center and the CEO of CHA Biotech with the task of managing the medical sector and business side of our group. I instead handle the overseas network and research development.

I focus on mapping out the group’s future growth engines and designing them. I concentrate on expanding the global networks [between our group and] other Pacific rim countries including the United States, Southeast Asian countries and Australia, as well as developing new drugs and medical technologies.

If the coronavirus pandemic hadn't happened, I would’ve spent half the year overseas.

In 2018, we acquired a 65 percent stake in Australia-based infertility center City Fertility. Australia is a powerhouse in infertility treatment as the world's first baby from a frozen embryo after in vitro fertilization was born in Australia in 1984.

We also acquired a 24-percent stake in Singapore-based Singapore Medical Group, which owns around 40 medical clinics in three Southeast Asian countries, and have become the major stakeholder of the group. We anticipate these movements will result in an increase in exports and create new business models in the health bio industry.


Since Covid-19, people are showing more interests in the bio industry.

It is desirable, but we still have a long way to go.

We should look back at our standards in the cold light of day. It’s no exaggeration to say that [Korea is] a small fish in a big pond. The core keywords for future biotechnology are cells, genes and epigenetics, but there are not many people who have expertise in these sectors [in Korea].

Among the world’s top 100 biotech companies, there is not a single Korean company. I wonder if Korea can really produce vaccines right away, even if the United States would waive the patent protections on their Covid-19 vaccines. It takes time to prepare enough manpower and equipment to begin mass production. We also have many technological problems to solve as well.


Shares of bio companies are on a roller coaster. Some say there are bubbles in the industry.

In the bio sector, there are a lot more failures than successes. As safety has been the most important issue in clinical trials, careful approaches are needed for investments in bio.

CHA Medical & Bio Group has two listed companies and I know that some investors are complaining about shares that have not been showing extreme changes. But I’m optimistic. I believe that the time will soon come when people realize the true value [of our companies].


China has developed its own Covid-19 vaccine.

China chose an area of concentration, which is the bio sector, and has been showing some results there. There are a lot of factors that we should take into consideration. To become a powerhouse in the bio sector, we need people. Korea should come up with national-level mid- and long-term plans to cultivate talent. Beyond Korea, they should be sent overseas and learn about advanced technology.

Scouting outstanding talent from foreign countries could be another option. CHA Biotech is currently building a facility that produces cell and gene therapies such as viral vectors through its U.S. subsidiary Matica Biotechnology, and has hired experts from related biotech companies, including Switzerland’s Lonza and Germany’s Boehringer Ingelheim, because we had no specialized manpower in Korea.

Building an ecosystem in the bio sector is important.

We should consider building a system where medical centers, research institutes and companies can work together and create synergy effects. Like Yul-gok Yi I’s argument of nurturing 100,000 soldiers [against possible foreign enemies], we should do the same with the bio sector. I think a solution is forming a bio city, a new city where 100,000 people can actually reside.

A research-focused hospital could be placed in the middle of the city, and hospitals specializing in each sector such as cancer or maternity clinics, bio research institutes and related biotech companies could be located around the hospital. Building facilities to produce high-technology biopharmaceuticals will maximize the synergy effects. It’s a bio cluster that includes hospitals, medical schools, biotech companies and research facilities altogether.

They are our efforts to create a bio ecosystem. CHA University Bundang Medical Center, which was selected as one of the Korea Research-driven hospitals by the government in 2013, has been conducting research on incurable diseases using stem cell treatments. It also has the Global Stem Cell Clinical Trials Center, which is an essential center to raise abilities to develop new drugs.

At the CHA Bio Complex in Pangyo, many companies, research centers and CHA University School of Medicine are located. A contract development and manufacturing organization [CDMO] facility for gene and cell therapy will also be completed by 2024 in the second Pangyo Techno Valley in Gyeonggi.


Maybe the group is putting too much focus on expansion?

Not at all. We are working toward an open innovation system in the pharmaceutical sector and a bio ecosystem.

I suggest that the doctors at our hospitals lecture in our group-affiliated research centers or companies at least one or two times a year. These exchanges between industry and academia are important.

CHA Biotech is an important link in that virtuous cycle. CHA Vaccine Institute is currently preparing for a technology-based special listing on the Kosdaq market with its patent technologies in immune enhancement programs. Hospitals are platform businesses, and the bio companies harvest the fruit.


Are you currently developing any treatment using stem cells?

We have developed treatment for degenerative disk herniation utilizing umbilical cord-derived stem cells, and this has currently been undergoing Phase 2a clinical trials.

We have also achieved notable results in research about glioblastoma, one of the malignant tumors. The survival duration of patients with relapsed glioblastoma is generally six to eight months, but it has turned out that more than 40 percent of patients who used our new treatment lived for over two years.

We’ve also been conducting research into a few more things, such as restoring the function of ovaries and treatment for Parkinson’s Disease using brain stem cells.


There are concerns that Korea's regulations prevent the bio industry from further growth.

I hope [the government] eases some regulations for developing cell therapeutics using their own cells, just like Japan.