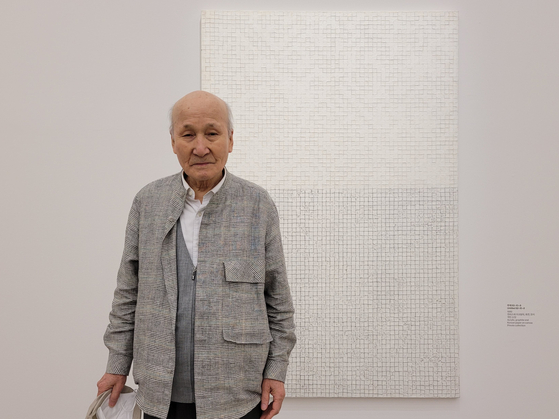 Chung Sang-Hwa in a preview of his retrospective on Friday at the National Museum of Modern and Contemporary Art (MMCA) in central Seoul. [MOON SO-YOUNG]


Chung Sang-Hwa, 89, stands before one of his Dansaekhwa, or monochrome paintings, in a preview of his retrospective on Friday at the National Museum of Modern and Contemporary Art (MMCA) in central Seoul. Chung is a central figure of the Dansaekhwa movement, which led the Korean abstract art in the late 20th century and gained international recognition in the 21st century.

Chung is well known for working without any assistant, although his monochromatic gridded paintings require hard labor of repetitively applying paint and kaolin clay to a canvas, folding the canvas to make cracks, tearing off the soil and paint from the canvas and repainting on the canvas to fill the negative areas. “By way of accumulating my labor in the spaces created on a canvas, I intend to bring delicately-changing color and density [in the grid spaces of the canvas], which will show a cosmic or natural law,” he said.

The artist does the work all alone quietly in the similar attitude to that of a monk practicing asceticism. Such a working process is in perfect harmony with the philosophy of Dansaekhwa characterized by repetitive gestures and reductionist aesthetics. “Looking back on my 70-year career, I feel satisfied while thinking ‘I did my best’ rather than ‘I did a good job.,’“ the artist said in the attitude of a monk.

The exhibition runs through Sept. 26.