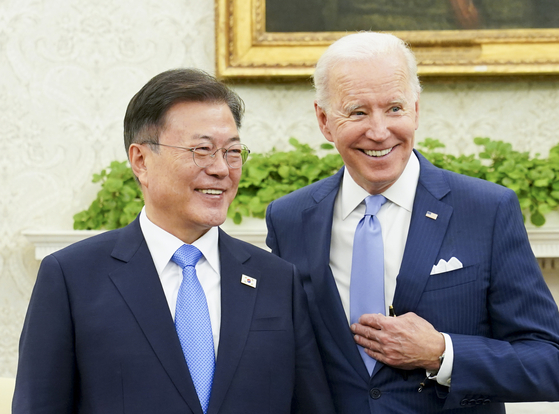 President Moon Jae-in, left, with U.S. President Joe Biden, during their meeting in the Oval Office of the White House in Washington D.C. on Friday. [YONHAP]


President Moon Jae-in wrapped up what he called “the best summit ever” with U.S. President Joe Biden over the weekend, returning home with a number of agreements covering Covid-19 vaccines, semiconductors, missile development and denuclearization of North Korea.

"The outcome of the summit exceeded our expectations," Moon wrote on his Facebook account Sunday. "The United States took a lot of care to understand where we were coming from [on many issues].”

Moon and Biden had a one-on-one meeting in the Oval Office of the White House in Washington D.C. on Friday for a little over half an hour before their top aides joined for another hour of talks. The summit extended for another 77 minutes after that, with the presence of more aides.

Agreements from the summit ranged from intentional engagement with North Korea for denuclearizing the Korean Peninsula and terminating the American cap on the Korean missiles program, to Covid-19 recovery efforts, including Korean investment on emerging technologies in the U.S. and American support for vaccines in Korea.

On the regional security front, the two nations agreed to coordinate their approaches to North Korea “in lockstep.”

“We spoke about the shared approach to the Democratic People’s Republic of Korea [DPRK] and the continuing threat of the DPRK’s missile programs,” said U.S. President Biden during the press conference. “My team consulted closely with President Moon’s team throughout the process of our DPRK review, and we both are deeply concerned about the situation. Our two nations also share a willingness to engage diplomatically with the DPRK to take pragmatic steps to reduce tensions as we move towards our ultimate goal of denuclearization of the Korean Peninsula.”

The two nations, in their joint statement, vowed to continue efforts for diplomacy and dialogue with the North, based on previous inter-Korean and U.S.-North Korea commitments such as the 2018 Panmunjom Declaration and Singapore Joint Statement, for “complete denuclearization and establishment of permanent peace on the Korean Peninsula.”

It was also announced during the press conference that Sung Kim, career diplomat and former U.S. ambassador to Korea, would be appointed as the U.S. special envoy to North Korea.

The announcement signaled the U.S. government’s intention to engage the North through dialogue, Moon said.

“It was generally expected among experts that [the U.S. government] would appoint the special envoy on North Korean human rights issues first,” Moon posted on his Facebook account Sunday. “The appointment shows that [the United States] is prioritizing the talks on denuclearization with North Korea.”

Moon added that because Kim is “well-versed in the situation of the Korean Peninsula and denuclearization talks,” not to mention his experience in the summit in Singapore, the first summit between a North Korean leader and a U.S. president in office, and his fluency in Korean and English, the appointment of Kim “sends a message to the North that [the U.S.] is ready for dialogue.”

“What I would not do is, I would not do what had been done in the recent past — I would not give him all that he is looking for, international recognition as legitimate, and allow him to move in a direction of appearing to be more serious about what he was not at all serious about,” Biden said in response to a question from the press about conditions for meeting with Kim.

“I would meet with him if there was a commitment on which we met — the commitment has to be that there is discussion about his nuclear arsenal,” he said.

The summit also put to rest the long-held hope of the Moon administration: The ending of the American restrictions on Korea’s missiles development.

“It is also with pleasure that I announce the termination of the missile guidelines,” said President Moon during the joint press conference on Friday. “The agreement displays for the world the robustness of our alliance.”

Seoul and Washington signed the missile guidelines in October 1979 at the end of the Park Chung Hee presidency. At the time, Korea agreed to a 180-kilometer (112-mile) maximum range of missiles in return for technology transfers from the United States. Washington was worried about an arms race in Northeast Asia.

With North Korea's escalating threats from both nuclear and missile programs, a series of revisions followed to the guidelines. Following the fourth and most recent revision, Seoul was free from restrictions on payloads and solid fuels, but it was still prohibited from developing and operating ballistic missiles with a range farther than 800 kilometers.

The guidelines, altogether named the Revised Missiles Guidelines, have been terminated, the joint statement by the two presidents announced Friday, bringing to Korea what President Moon has pledged during his presidency, the “complete missile sovereignty.”

The two presidents in the press conference also highlighted that the alliance forged in blood, going forward, would turn a new chapter, through partnerships in areas such as on emerging technologies including 5G network and semiconductors.

“We also talked about how to harness our nations’ technological advantages […] This includes everything from strengthening our cybersecurity to deepening our cooperation to build an open, secure 5G network,” Biden said. “I am particularly gratified that so many leading South Korean companies see the benefit of investing in the United States, including with the announcement this morning from Samsung, Hyundai and others.”

The Biden administration has put forward a $2 trillion plan to revamp the nation’s infrastructure, including roads and bridges but also technological infrastructure such as a 5G network, for the next eight years.

Adding that “we will do great work together,” Biden applauded top executives from SK, Samsung, LG and Hyundai Motors during the conference, who, earlier in the day’s roundtable discussions with their American counterparts, pledged investments in the United States totaling $40 billion.

In return, the U.S. government announced plans to vaccinate 550,000 Korean forces engaging regularly with American soldiers in Korea, in addition to launching a bilateral vaccine partnership to focus on vaccine production and research.

Moon called the announcement symbolic of the importance of the Korea-U.S. alliance.

“The announcement of the direct support of vaccines was a very pleasant surprise,” Moon wrote on Facebook. “Not all Americans are vaccinated at this point, and there are many countries asking for assistance […] I had heard that there was quite a bit of opposition from within on supporting Korea, a developed nation […] but the decision has shown the importance of the Korea-U.S. alliance.”

Other topics of issue in the bilateral ties, such as Korea-U.S.-Japan trilateral dialogues, the Quad, and stability in the Taiwan Strait were mentioned in the joint statement but not dealt with in detail during the conference.

The next time the heads of states of relevant nations will meet will be at the G7 meeting in Britain from June 11 to 13, where Korea, Australia, India and South Africa have been invited as guests.