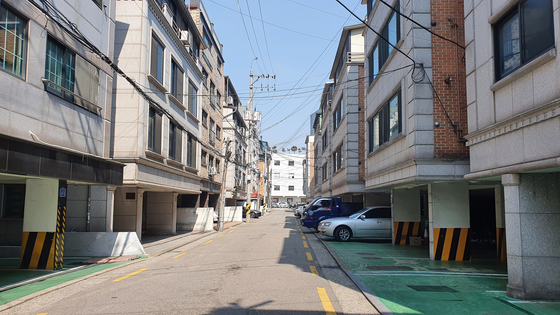 Park Gye-ja, 68, owns a five-story “villa” in Songpa District, southern Seoul, where she lives and rents out 11 units.

In Korea, villas are generally older buildings no higher than five stories with a number of smaller housing units that are usually for low-income households.

This year, Park is required to pay 48 million won ($42,800) in taxes for the villa including 37 million won of comprehensive real estate tax. That’s eight times more than the taxes paid by a landlord with an 84-square-meter (904.2-square-foot) apartment in Raemian Daechi Palace in Gangnam District, southern Seoul.

The taxes total more than the rents paid by tenants, which add up to 45 million won.

“I've been working hard during my lifetime taking care of my husband who has disabilities. I work at an elderly daycare center five hours every day,” Park told the JoongAng Ilbo via email. “Why does the government do this to me? I didn’t do anything wrong to them. Why does the government give this severe punishment to me?”

Landlords who run housing rental businesses are suffering from the tightened real estate regulations and the government’s continuous efforts to impose heavier taxes on homeowners.

The Special Act on Private Rental Housing classifies these people as rental business entities, as they are “in the business of acquiring and renting at least one private rental unit."

According to Park, the villa was actually a house in 1999 when she first purchased it. She transformed it into five-story villa in 2003 and registered as a rental business entity. Each unit is 37 square meters in size.

But since August 2020, the government tightened the system and abolished tax benefits for the “short-term private rental housing” system, which refers to a rental business entity that acquires and leases a property for at least four years. People like Park are left with two options: they can voluntarily deregister themselves or the government will cancel their registration automatically.

With the disqualification, Park is now just an individual who owns 12 units and is obliged to pay an enormous amount of taxes.

Park tried to sell the house, but failed because no one wants to buy it. Koreans have become reluctant to own properties since the government's real estate measures.

Park ended up selling two units to her two sons. The sons, who now own a unit each in Park's villa, have to pay taxes and are not allowed to apply for housing subscription, according to Park.

"Two of my tenants have been living at my villa for 19 consecutive years. But the government calls me a speculator," Park said. "I can’t sleep well these days due to the worries about tax bills I will receive at the end of the year. The government considers me as the main offender who caused a rise in the real estate prices."

“I just lived as I was told, but have been betrayed by the government.”

People who run housing rental businesses like Park argue that the tightened regulations are just the government’s attempt to blame them for the failure of its real estate measures. Experts say the regulations prevent low-income people from finding the homes they can afford.

“Most of housing rental businesses offer people small-sized houses or units for their residential environment,” said Woo Byung-tak, the head of the real estate investment counseling department at Shinhan Bank. “The supply will dry up if the government cuts benefits for those businesses or entirely cancels the system.”

Since the new law went into effect in August, a total of 500,708 houses were deregistered. Of them, 384,660, or 77 percent, are houses such as villas that are not apartments.