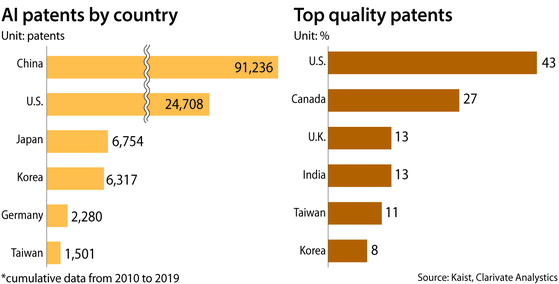 Korea ranks fourth place in the world in terms of the number of artificial intelligence (AI) patents it owns, according to a recent report. But when it comes to quality not quantity, that ranking falls to sixth.

According to a report jointly published by Kaist Center for Innovation Strategy and Policy (CISP) and Clarivate Analytics, Korea ranks in fourth place among 10 countries in terms of the quantity of AI patents, with 6,317.

The 10 countries — China, the United States, Korea, Japan, Germany, Taiwan, Britain, Canada, France and India — own 92 percent of the total AI patents in the world. The results are based on cumulative data, compiling figures from 2010 to 2019.

Ranking fourth, Korea’s AI patents are equivalent to only 7 percent of those held by Chinese companies, where government financial support is more readily available.

The quality of Korean AI patents fell even lower, coming in at 6th place.

The report assessed patent quality based on combined patent impact (CPI), considering patents that fall in the upper 10 percent of the index to be high quality. The index is calculated by combining the number of forward citations, referring to the number of times a patent was cited by another, whether its registered in both local and foreign patent offices and the term of the patent.

Eight percent of high quality AI patents were Korean. The average percentage share of the 10 countries was 14 percent.

The United States was second to China in terms of quantity, but took the top spot for quality. About 43 percent of high quality AI patents are registered in the United States. Canada came in second with 27 percent, followed by Britain and India with 13 percent each.

China lagged far behind, coming in ninth place. The country has 3.5 times more patents than the United States, but only 5 percent of high quality patents are from China. China ranked low because 96 percent of its patents were only registered in the local market, and not in overseas patent offices.

Korea, Japan and Taiwan also suffered from having 60 percent of their patents exclusively registered domestically.

“Korea is seeing a rapid increase in the number of AI patents, but falls behind in terms of quality compared to other companies,” said Kim Jin-woo, head of Clarivate Analytics Korea. “We now need to push for qualitative growth based on technology development.”

Canada only has 960 AI patents, but climbed to second place in terms of quality. It’s responsible for 27 percent of high quality patents. The report credits Canada’s well-structured AI ecosystem for the positive outcomes.

“Countries like Canada and the United States have a well balanced AI ecosystem where all three parties are equally developed,” said Kim.

Among AI patents registered by government-funded research institutes in the United States, 48.5 percent were categorized as high quality, while 44.2 percent by corporations and 37.1 percent by universities were considered high quality.

However, only 6 percent of AI patents by Chinese universities, 5.2 percent by government-funded centers and 3.5 percent by companies were categorized as high quality.

Korea’s universities fall short on patent applications compared to the other two sectors.

While 11.8 percent of corporate-filed AI patents and 9.5 percent from government-funded research centers are high quality, only 2.8 percent of patents registered by local university qualify. For Korea to develop quality AI technology, universities have to step up their research.

Registered patents play to different countries' strengths. AI patents from Germany and Britain, countries with a strong manufacturing sector, were centered on robotics-related technology. Korea’s patents were focused on natural language processing technology, but fell behind in cognitive computing and human-computer interaction.