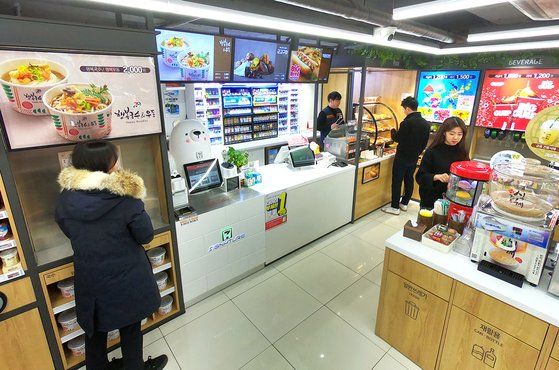 
Convenience stores are growing in size to offer a wider variety of products and services – and attract more customers.

But for supermarkets, downsizing is key.

In March, a 7-Eleven near the Korea Tourism University in Icheon, Gyeonggi doubled in size from 25-pyeong (889 square feet) store to 50-pyeong, taking over the store that was next door.

The extra space was used for 11 additional sets of display shelves but also for seating for 20. It now offers fried chicken and udon prepared via instant cookers, as well as non-food related services such as scanning, copying and faxing from a copying machine.

7-Eleven expanded 40 branches in the first quarter. In all, some 600 branches have grown in size over the years. The average size of 7-Eleven branches is 17-pyeong, but the stores that grew are 27-pyeong on average. Daily sales always rise after expansions.

“Convenience stores are limited to selling a certain number of products and services when the venue is small,” said a spokesperson for 7-Eleven. “Bigger stores provide more room, helping stores offer services that customers want, and help to increase sales.”

CU launched a CU Jump Up project in March, which helps franchisees expand their space. Emart24 has Reserve stores, premium versions of its convenience stores. Reserve branches have a larger eating spaces designed to resemble cafes. They carry groceries and a larger selection of wines and liquors. Some even sell accessories for Apple devices. Emart24’s Reserve stores pull in 51 percent more sales than ordinary stores.

As convenience stores go bigger, supermarkets are discovering that less can be more. Many are reducing their stock-keeping unit (SKU), an industry definition of the number of products a store carries. Largely, this is simply dropping items that don't sell well. Lotte Mart sold an average of 15,000  types of products per store last year, a 51 percent decrease from 2019. Branded clothes that don’t sell well and low-end cosmetics are frequently withdrawn from shelves. There are 605 low-end cosmetics stores renting space at Lotte Mart branches.

Dropping products gives the supermarkets empty space. Some is being filled by new tenants offering a range of services or activities, including screen golf arcades and indoor playgrounds. The Korea Medical Institute’s Suwon center is located on the first floor of Lotte Mart’s Gwonseon branch, in Suwon, Gyeonggi. A 165-pyeong screen golf practice room, Bravo Public Screen Golf, has opened up in Lotte Mart’s Cheoncheon branch, also in Suwon, Gyeonggi. With an increasing number of pet lovers in Korea, Lotte Mart is planning to add pet-related boutiques in branches.