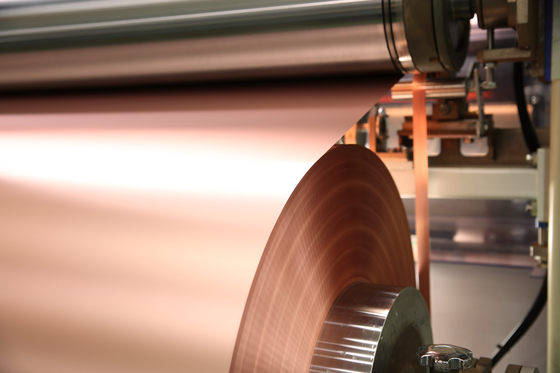 A roll of copper foil produced by SK Nexilis [SKC]


SK Nexilis, a wholly owned subsidiary of KRX-listed SKC, will establish a copper foil factory in Europe in what could be an 800 billion won ($627 million) investment.

The board of the copper foil manufacturer approved the proposal to build a plant capable of producing 50,000 tons of copper foil a year on Wednesday, although the specific location and the exact investment have not been determined.

But the total cost could hit 800 billion won given the targeted capacity.

“Since SK Nexilis invested around 700 billion won to build a copper foil plant in Malaysia, it will cost a comparable amount, in the range of 700 billion to 800 billion won,” said a spokesperson for SKC.

The plant is most likely to be located in Poland, according to a statement released by SKC.

“SK Nexilis is in discussions with the Polish government to negotiate details,” the statement said, “Poland would allow for great access to clients as four major EV battery makers have their factories either in Poland or nearby.”

The company aims to break ground this year and complete the facility by 2024.

The announcement came two months after the company decided to spend 700 billion won to build its first overseas copper-foil factory in Malaysia.

The moves are aimed at ramping up copper foil production to meet surging demand for EVs in the coming years as some countries, especially those in Europe, step up efforts to boost EV demand.

Copper foil is a core component in lithium-ion batteries for EVs. They function as the negative pole, which lithium ions flow toward from the positive pole as the battery releases electricity.