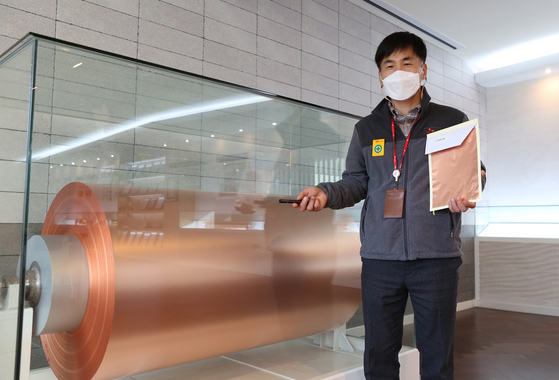 
JEONGEUP, North Jeolla — Huge rolls of copper foil floated across the room, hovering above the human workers at SK Nexilis’ fourth factory in Jeongeup on Monday. These heavy bundles of metal are lifted with ease by automatic cranes that move along rails installed just under the factory’s ceiling.

On the other side of the facility, an unmanned robotic vehicle pulls up just in time to receive a roll of copper from one of the cranes, setting off immediately to shuttle it to the next destination.

Measuring around 1.5 meters (5 feet) in diameter and height, these bundles unroll to 70 kilometers (43 miles) of copper foil thinner than human hair.

“Rolls that go over 70 kilometers in length can weigh up to 5 tons,” said Kim Ja-sun, leader of the SK Nexilis’ copper foil production team, who led the Monday press tour.

“At that point, they can’t be transported by manned vehicles because there are no models that can sustain this weight. That’s why we had to use robots.”

Copper foil is a core component in lithium ion batteries for electric vehicles (EVs). They function as the negative pole which lithium ions flow into from the positive pole as the battery releases electricity. More than 30 kilograms of copper foil go into a typical passenger EV. 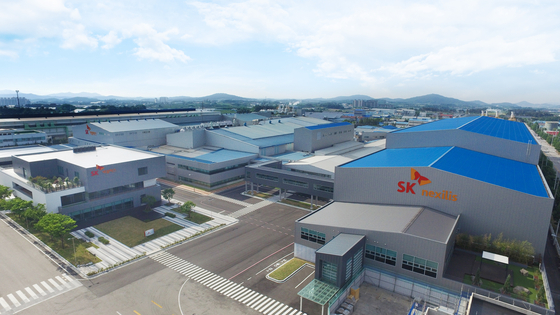 Having started production here in 1996, the factories used to produce copper foil for IT devices, but today a dominant portion of revenue comes from EV battery makers.

“In the July-September period, quarterly revenue surpassed the 100 billion won [$89.7 million] threshold for the first time in history thanks to the launch of our fourth factory and a demand surge for EVs in Europe,” said Jun Sang-hyun, SK Nexilis’ production unit head.

The Monday press tour started at the dissolving room in factory No. 3. Rows of massive tanks roughly 3 meters across were melting down copper wires in sulfuric acid. Organic additives are then added to the resulting sludge.

For suppliers, their competitive edge lies in making the foil as thin as possible — a factor directly linked to battery performance — while making sure the rolls are durable enough to stay intact as they pass through battery production equipment.

SK Nexilis was the first among its peers, it claims, to start mass production of 6- and 5-micrometer copper foils in 2013 and 2017. Last year, the company succeeded in producing a 30-kilometer roll of 4 micrometers. The most widely used in EV batteries today are the 6- and 8-micrometer products.

The organic additive, of which each company has its own secret recipe, is the first step in realizing that high-quality copper foil, Jun said. The company believes its organic cocktail is five to eight years ahead of its competitors.

Out of the dissolving chamber, the liquid combination is sent to the next room filled with lines of equipment that resemble an oversized watermill. 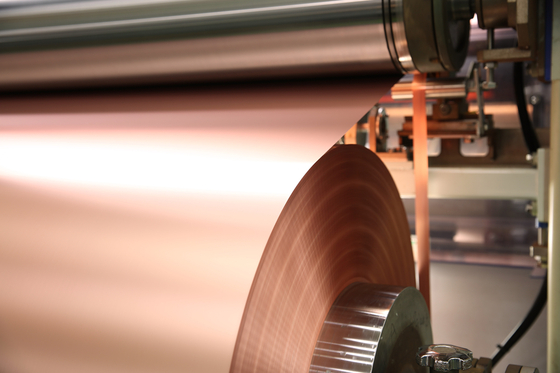 As the giant wheel turns, the electrified surface picks up copper ions inside the liquid and instantly forms an even layer of copper on the wheel, which is soon separated from the titanium wheel to be made into what’s called “mother rolls.” The mother rolls are slit into "product rolls" by the width and length requested by the customer before they are shipped to their respective destinations.

The process itself doesn’t look complicated to the bare eyes, but this electro-plating is the core of SK’s handling technology to produce the “thinnest, longest and widest” copper foil in the game.

While the foil’s thinness decides the battery’s weight and performance, it’s the roll’s length and width that enhance the battery makers’ productivity.

“Changing copper foil rolls requires a workforce and halting the facility for the exchange — that’s why they’re made to go on for days [on the battery production line],” said Jun.

“At the moment, we can produce mother rolls with a length of up to 70,000 meters, but the product rolls we supply are cut down to a maximum 15,000 meters, according to how well a customers’ equipment can sustain the roll’s weight.”

SK’s ability to produce large-sized rolls is also what drove the need to adopt state-of-the-art equipment like the automatic crane or unmanned vehicles to its latest No. 4 factory, which just completed construction this year.

The Jeongeup complex’s production capacity at the moment totals 34,000 tons a year. After acquiring the copper foil business from KCF Technologies in January, SK decided to invest a total of 240 billion won to establish two more plants at Jeongeup by 2022, which would bring the maximum production per year to 52,000 tons.

For its next big investment, the company has its eyes set overseas. The goal is to expand annual production by three to fourfold by 2025.

Local media have reported that Malaysia, the United States and Poland are among the options, but SK has not confirmed, saying the matter is not yet decided.

“Our biggest strength is the technology. But if we can combine that with low production costs in Southeast Asia, then that could create big effects in our cost competitiveness,” Yi Jae-hong, SK Nexilis chief managing officer, said in a Monday media conference after the press tour.

“The United States and Europe offer an advantage in terms of proximity to carmakers and EV battery companies... Another factor to think about is the speed of market expansion [for EV batteries]. A changed administration and policy may cause change in market growth, so that could be another point of consideration.”

SK Nexilis will be announcing the site of its first overseas production site within this year.