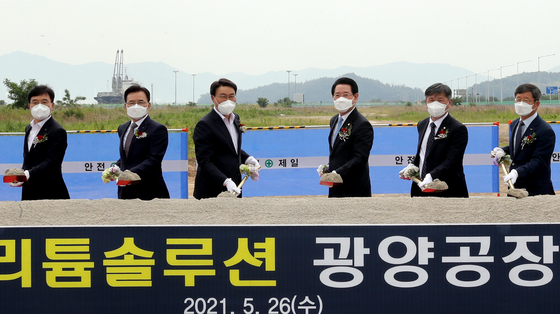 Located on 196,000 square meters of land in Gwangyang, South Jeolla, the plant will produce 43,000 tons of lithium hydroxide per year, with minerals imported from Australia and other countries. This is enough to make batteries for one million EVs, Posco said.

“The EV material business is a growth engine for the entire group,” said Posco Chairman Choi Jung-woo in a factory groundbreaking ceremony, Wednesday.

“Mass producing lithium hydroxide is a big part of that plan. Localizing supply is an important task for us and the entire local EV industry, which is competing in the global market.”


According to Posco, lithium supplies for local EVs have been imported from China.

The company is also building lithium production facilities at Hombre Muerto salt lake in Argentina, which it acquired in 2018. According to Posco’s estimate, the lake contains 13.5 million tons of lithium reserves that can be made into lithium hydroxide or lithium carbonate. The factory will be completed in 2023.