'Move to Heaven' screenwriter found inspiration in grief and growth

'Move to Heaven' screenwriter found inspiration in grief and growth 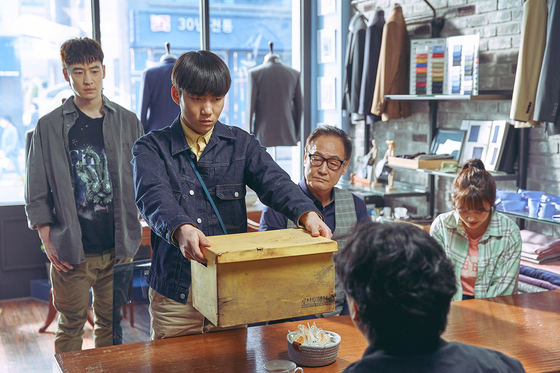 A scene from the Netflix original series 'Move to Heaven,' written by Yoon Ji-ryun [NETFLIX]


“I think I was always more curious about death than others. And there was a time when I was so swept up in the sadness and mourning after the sudden death of a loved one. I was deliberating on whether I should continue writing, and that was when I looked up books written by those who lost someone they loved, and how they heal.”

Screenwriter Yoon Ji-ryun, the creator of the Netflix original series “Move to Heaven,” whose other works include the mega-hit KBS drama series “Boys over Flowers” (2009), said at a recent online interview with the Korea JoongAng Daily that it was during this time of grieving that she discovered an essay book written by trauma cleaner Kim Sae-byeol, titled “Things that are left behind” (translated). A trauma cleaner refers to someone whose job is to remove, clean, decontaminate and sanitize an area where a person has died.

“I already knew what a trauma cleaner was but when I read the book, his [the author's] perspective on death and the deceased was very much parallel to what I wanted to know, and I wanted to convey my story from such viewpoint.”

“Move to Heaven” is centered on two trauma cleaners, Sang-gu and Geu-ru, and their jobs cleaning the homes of people who have died and passing on their meaningful possessions to their family members.

Although the 10 episodes in the series are not based on the book, Yoon said that it was the motivation for her to write the story. She first read the book in August 2015 and immediately contacted Kim through its publisher, She wrote the script over two years after interviewing him and researching the stories of other trauma cleaners in Japan and the United States. She also had the chance to visit a site where Kim and his crew were cleaning.

“The scene where I visited was after the death of an elderly lady in her 70s,” the writer said. “She died alone [in her home] from the pain of a terminal disease. As Kim and I sorted through her possessions, we could figure out what kind of life she had led and learn her story. We talked about how much she meditated daily, how much alcohol she drank and what kind of snacks she ate when she drank. We could see and discuss what her life was like when she was younger. That experience had an enormous influence on how I crafted ‘Move to Heaven.’”

In the series, the stories about the deceased, although entirely fictional, are all closely linked to social issues ranging from dating violence, solitary deaths, homosexuality and Korean adoptees. Yoon said that she chose stories that she was drawn to, or “those whose homes I personally wanted to go to and clean.”

Yoon also explained why she decided that the character of Geu-ru would have Asperger's syndrome.

“Geu-ru had to be a messenger that doesn’t realistically exist in real life,” she said. “Even when the client doesn’t want it, even refuses it, he obstinately has to do what he feels is right. It’s not that he’s arrogant or vain, but I was worried that he might come off looking bad to the viewers or might be too tiring.

“Also as the messenger, I didn’t want him to be sad or gloomy when he’s passing on the news or possessions,” she continued. “What we’re telling in this story is already sad enough as it is. Geu-ru is the only person who doesn’t cry in this story. He’s a messenger without emotions, but he opens the gateway for people to sympathize and communicate. So a character with an Asperger's Syndrome who is emotionally deficient became a very crucial protagonist in this story.”

Yoon admitted that she deliberated over the genre of the story and whether she should maintain a more lighthearted tone or make it a thriller series, which are popular nowadays.

“But I was curious about those who passed away,” she said. “I wanted to know what lives they led, what they loved, and if they were in love, what thought would be on their minds as they were drawing their last breaths. And if they were clinging on to life, what was their reason? Thinking about that was what made me sad, but that sadness strangely was comforting to me, so I wanted to convey what I felt in the story.”

The series which was meant to provide warmth and comfort to viewers, also had an impact on Yoon.

“Yes, it is a project that changed me,” she said. “Before ‘Move to Heaven,’ I doubted whether or not I could write beautiful stories that could stir people’s hearts. I felt that way for a long time but in the process of writing this story, I was comforted and healed. I found myself imagining writing about love stories or those fluttery emotions when one falls in love, and it gave me strength and became an inspiration for me to write new stories.”