Posco to collab with Orsted to produce hydrogen using wind

Posco to collab with Orsted to produce hydrogen using wind 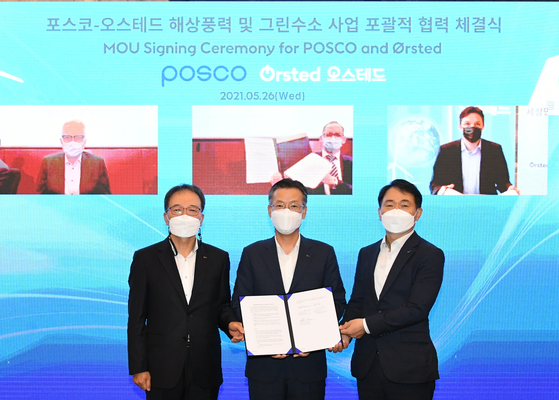 Top executives of Posco and Denmark's Orsted sign a memorandum of understanding, virtually, on Thursday. [POSCO]


Posco will collaborate with Denmark’s Orsted, one of the leading wind power generators in the world, to produce hydrogen using wind-generated electricity.

Under a memorandum of understanding signed Thursday, the two companies will set out to evaluate the feasibility of producing “green hydrogen” in Incheon, where the Danish company is planning to build Korea’s largest wind power plant.


In November last year, Orsted announced it will build a wind-generating complex in Incheon, a project that would consume investment of 8 trillion won ($7 billion). Slated to start commercialization in 2027, the plant will produce up to 1.6 gigawatt hours of electricity — the largest capacity for a wind-power complex in Korea.


Posco has worked with Orsted before as the steel supplier to the Danish company for projects in Britain.


If the two companies conclude that the green hydrogen business is feasible, Orsted will build production facilities for “green hydrogen” in Incheon while Posco will supply steel for the project and help in producing and saving hydrogen made with wind-generated electricity.