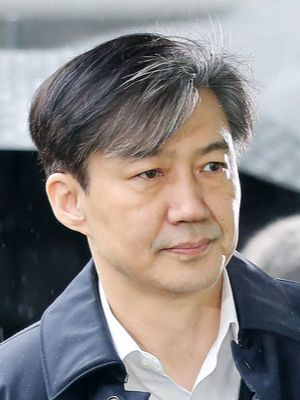 The complaint was filed in the morning by PPP lawmakers Jun Joo-hyae and Yoo Sang-bum, who accused Cho and then-Justice Minister Yoon of conspiring with Park in 2019 to stop an investigation into an illegal travel ban slapped on former Vice Justice Minister Kim Hak-eui. Cho was the senior secretary to the president for civil affairs at the time.

Kim resigned from his post after just six days on the job in March 2013 due to allegations he had received bribes and sexual favors. He was acquitted of bribery charges in 2013 and 2015, but Moon ordered a reinvestigation in March 2019.

A political scandal erupted when a prosecutor working on Kim’s case named Lee Gyu-won sent immigration officers to Incheon Airport to stop Kim from boarding a flight to Bangkok on March 23, 2019, after obtaining an emergency overseas travel ban from the Justice Ministry.

A whistleblower also alleged that the travel ban request form at the time had neither the official stamp of the prosecutor’s supervisor nor an authentic case number, which would make it illegal.

According to Lee Sung-yoon’s arraignment, Cho told Yoon in June 2019 that Lee Gyu-won would soon leave Korea to study abroad, and asked that he not be investigated before he left the country.

The move by the PPP is widely seen as a symbolic move to test the CIO’s willingness to go after key figures of the Moon Jae-in administration and the ruling Democratic Party (DP), who pushed to create the office in January over the PPP’s opposition.

The CIO deprives state prosecutors of their monopoly over indictments of top officials, thereby undercutting their influence over politics.

Members of the DP and the Moon administration have long questioned the neutrality of the state prosecution service and its probes of top politicians.

As a result of the reforms, investigations by the state prosecution service must be handed over to the CIO if they involve high-ranking officials.

Prior to the PPP’s complaint, prosecutors have already referred the case of Yoon and other prosecutors suspected of trying to block an investigation into Lee Gyu-won to the CIO on May 13.