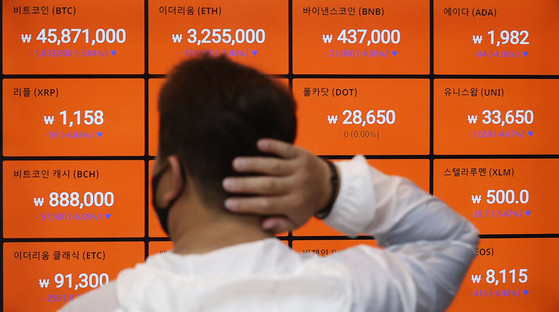 Bitcoin value is shown on a board at Bithumb in Gangnam, Seoul, on Friday. [YONHAP]

The Financial Services Commission (FSC) will oversee virtual asset businesses, set regulations for them and prevent money laundering with them, the Ministry of Science and ICT will be committed to promoting blockchain and preventing hacking, while the police will focus on related crimes, according to a joint statement released Friday.

Other parts of the government involved in cryptocurrency regulation and supervision include the Finance Ministry, the Fair Trade Commission, the National Tax Services and Korea Customs Service.

Under new regulations, all virtual-asset businesses, whether they sell, buy, exchange, store or broker, must register with the Korea Financial Intelligence Unit (KoFIU) by Sept. 25.  Those failing to do so and continuing to operate will attract punishments of up to five years in prison and 50 million won fines.

Registered virtual asset businesses will be responsible for preventing money laundering, verifying the identity of customers and reporting suspicious exchanges

All accounts must be opened under a person’s real identity.

The government estimates that there are 60 virtual asset exchanges in the country.

Only 20 have been certified by the Korea Internet & Security Agency (KISA) for information security management systems, while only four – Upbit, Bithumb, Korbit and Coinone -have relationships with banks for the opening of real-name accounts.

Until now, government departments have been hesitant to take center stage. Investors were confused as to whether the FSC or the Justice Ministry was in charge of issues related to cryptocurrency investments.

The clarification on the roles of government departments came as cryptocurrency investments became controversial in recent months.

The cryptocurrency market has been on rollercoaster. Bitcoin values in the local market peaked to 80 million won per coin and then halved.

Investments in virtual assets have been popular with young people who believe that they have missed out rising real estate prices and the opportunity to accumulate wealth.

The government until now remained at a distance.

The government on Friday remained adamant that investors themselves should take responsibility when investing in virtual assets as they are not recognized as a currency or a financial product.

“No one can guarantee its value, and there is a risks of massive losses due to the volatile exchange environment at home and abroad,” the joint government statement stated.

The government has been investigating virtual assets since 2017.

Last year, the police investigated 333 cases and arrested 560 people on cryptocurrency fraud. That’s a surge from 2018, when 62 fraud cases were investigated and 139 people arrested.

According to the government, since April the police have looked into 41 fraud cases and 27 cybercrimes, including phishing and hacking.

It also emphasized that any income generated from virtual assets since the beginning of this year has to be reported to the tax agency by May next year.  The government will impose a 20 percent tax on the income exceeding 2.5 million won.