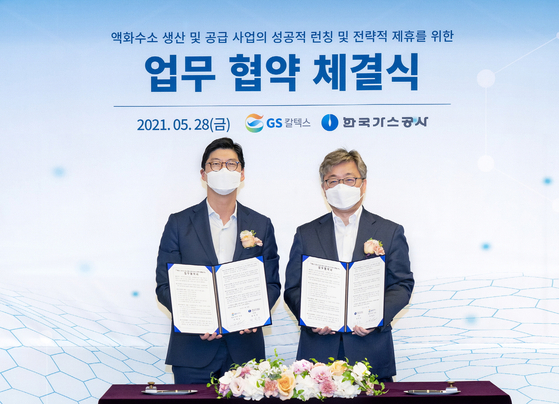 GS Caltex will jump into the liquid hydrogen business in partnership with Korea Gas Corporation (Kogas).

The oil refining company said Friday that it has signed a memorandum of understanding (MOU) with Kogas to collaborate on various aspects of the liquid hydrogen’s supply chain, from manufacturing to distribution.

The planned factory will run in an eco-friendly and cost-effective way by utilizing cold energy, which is a byproduct of the regasifyng the liquefied Natural Gas (LNG) at the terminal, instead of using electricity or steam, according to the company.

GS Caltex and Kogas will build liquid hydrogen charging stations around Seoul and other select regions in time for the completion of the factory.

The oil refining company says that liquid hydrogen has competitiveness over the more common gaseous hydrogen since the charger containing the liquid version required one-third of space. Liquified hydrogen can be more easily transported.

“By combining GS Caltex’s experience in running gas and charging stations and the experience of Kogas in the LNG business, the two companies will create synergy in the hydrogen business,” said Hur Sae-hong, CEO of GS Caltex in a release Friday.

GS Caltex has been making foray into the hydrogen business since last year when it formed a partnership with Hyundai Motor to build gas hydrogen charging stations at some of its existing gas stations.

It aims to build hydrogen charging stations in Yeosu, South Jeolla, Gwangju, Gyeonggi and on Jeju Island by next year.