LX Holdings and LX agree to end conflict over name

LX Holdings and LX agree to end conflict over name 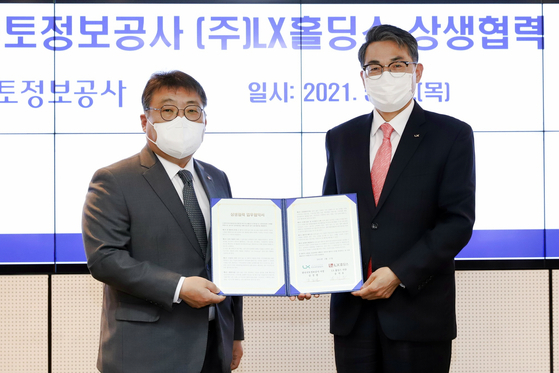 
LX Holdings, the LG Corp spinoff, and LX, a public agency under the Ministry of Land, Infrastructure and Transport, have agreed to end their dispute over the name.

On Friday, the two said they signed a memorandum of understanding the previous day to mutually respect the use of “LX” in their respective businesses. They would both refrain from using the label in overlapping business fields.

Short for the Korea Land and Geospatial Informatix, LX is a state-owned service provider dealing with land information.

The dispute between the two arose after LG Corporation applied for the LX trademark from the Korean Intellectual Property Office in March. At the time, the public agency had also been using LX as its English name for nearly 10 years, and it argued that the spinoff’s use of the brand would cause confusion.

With the conflict having come to an end, the LX and LX said they would develop a cooperative relationship to discover opportunities to work together, like in overseas businesses or developing state-of-art technology together in fields like digital twins, drones and robots.