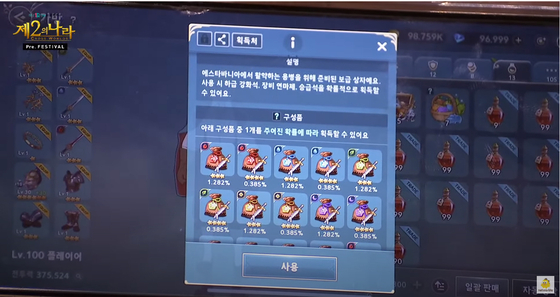 
The Korea Association of Game Industry (K-Games) announced a new set of regulations Thursday aimed at increasing transparency in games. The new regulations will take effect on Dec. 1.

The regulations, self-imposed by the group on its members, relate to so-called loot boxes, the virtual treasure chests found throughout popular games that allow players to customize their character or weapons.

Currently, game companies are required to provide the odds for purchasable loot boxes that contain in-game items. Under the new rules, the odds for all in-game loot box purchases related to chance, such as skill, character or equipment upgrades, will also have to be disclosed.

For instance, FIFA mobile, Nexon’s football simulation game, explicitly states the probability of loot boxes drawn to acquire playable characters. But items to upgrade player stats that are drawn in in-game events with a random chance on whether the upgrade is successful or not, didn't. The company will now have to disclose what that chance actually is.

The regulation also states that loot box probability needs to be easily accessible for players. Based on previous regulations, players had to visit the game company’s website or official forums to check the probabilities of drawing specific items.

Netmarble’s Cross Worlds, slated to launch on June 10, will adapt the new guidelines. When purchasing a loot box, the odds of earning every item will be visible inside the game, on the same page users use to decide whether to pay for the random draw.

MapleStory announced in February that the Rebirth Flame loot box featured in the game would be fixed to realize “the same probability” for all items. This fueled anger among users that had assumed the probabilities for each item had been consistent, regardless of value.

On April 20, Nexon was investigated by the Fair Trade Commission (FTC) for allegedly manipulating odds. Gamers also complained that loot boxes in other games, including NCSoft’s Lineage 2M, don’t disclose the odds for some items.

“Companies were able to slip away by keeping item probabilities secret, but not anymore,” said a spokesperson for one of the big game companies. “One mistake will be a fatal blow to the credibility of the company itself.”


Although the guidelines are self-regulatory with no legal backing, K-Games said it will keep a close eye on its 72 member companies.

The association conducts a monthly inspection on top 100 online and mobile games based on Gametrics and Gevolution data.

If games are found to not disclose loot box probability, the association will send an official request, asking that the odds are explicitly stated. Companies that don’t follow suit even after the initial request will have their names publicly posted on the K-Games website.

Lawmakers are also pushing for similar guidelines in the legislature.

In March, Rep Yoo Dong-soo of the ruling democratic party submitted an amendment to the Game Industry Promotion Act on February, obliging game publishers to disclose the probability of all types of purchasable loot boxes.

Rep. Lee Sang-heon of the ruling Democratic Party and 16 others also submitted a bill in February that would impose a fine or a prison term on game publishers that don’t disclose loot box details.